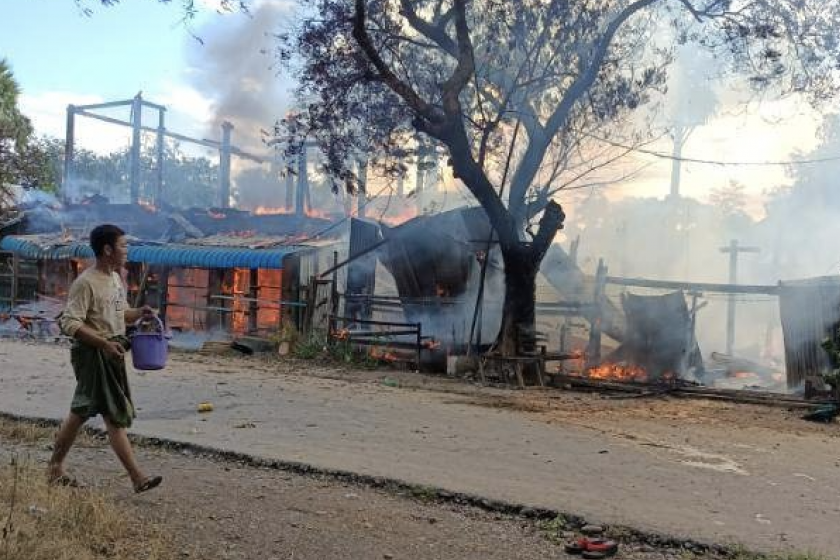 The raid on Htei Hlaw, which is in Gangaw Township, began at around 4am, shortly after junta troops clashed with members of the local People’s Defence Force (PDF) in the village.

Junta soldiers injured three PDF fighters and killed another, locals said. Then at around 6am the soldiers began setting fire to houses, they added.

“​​We can still see a lot of smoke coming from the village,” said one Htei Law local. Most of the village’s roughly 1,000 residents have fled and are now sheltering in the surrounding area.

One man, 55-year-old Ba Win, refused to flee with the others and was shot in the head, a second Htei Hlaw resident said.

“He got his brains blown out by the soldiers. He’s just a regular villager. He didn’t even do anything,” he said.

Junta troops occupied the village until around 3pm. When some villagers returned to assess the situation afterwards, they found their livestock had been killed.

“They slaughtered the animals by themselves and cooked them in the villagers’ houses,” the second resident said.

The PDF fighter who was killed in the early morning clash was 20 years old, said a third village. “He was shot in the right side of his chest. We saw him lying in a pool of blood,” he said.

Residents put out the fire on Sunday with the help of people from surrounding villages. Of the 27 houses that were set on fire, 20 were completely destroyed.

“We don’t even have homes to go back to anymore,” said the second villager. “I see this as them threatening civilians so that they won’t revolt against them.”

Gangaw has shown fierce resistance to the junta’s rule and its residents have faced repeated raids and violence as a result. On September 9 junta soldiers killed 18 people, including civilians and teenage children, during a clash with PDF fighters in the village of Myin Thar.

Junta troops also torched 36 houses in the village, according to data released by the National Unity Government.

The following day soldiers burned down at least 36 houses in Hnan Khar village, according to residents.