Soldiers burn down another 14 houses in Hnan Khar village 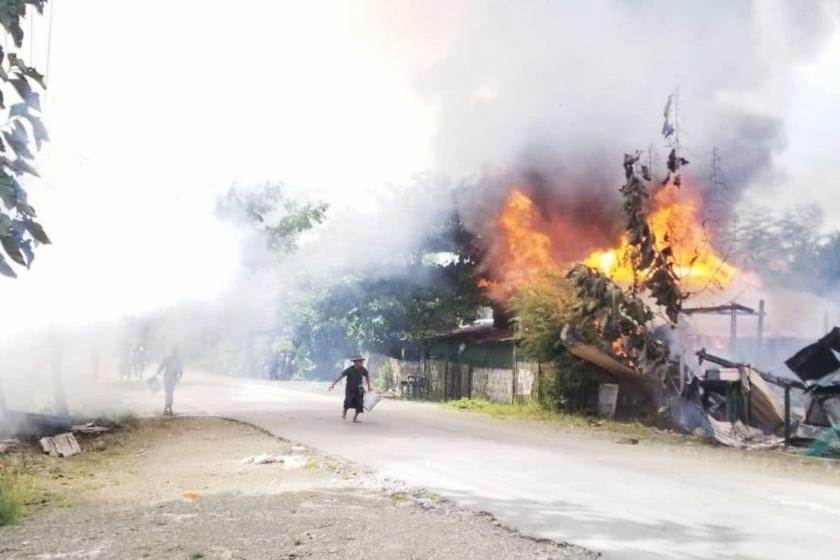 Local PDF fighters were unable to stop the raid because they don’t have enough weapons and ammunition, residents said

Junta soldiers once again stormed the village of Hnan Khar on Monday and set fire to more homes, with local resistance fighters unable to hold them off because they are reportedly short of weapons and ammunition.

A 12-wheeled troop carrier and two light trucks full of soldiers arrived at Hnan Khar at around 10am and torched 14 homes, bringing the total number of houses destroyed by recent junta-led arson in the village to roughly 50, according to locals.

“They set fire to houses, fired their guns and left immediately,” said a resident of the village, which is in Magway Region’s Gangaw Township. “The arson was intentional… they were trying to scare us.”

Local youths worked together to put out the blaze, he added.

The raid came after People’s Defence Force (PDF) fighters in the village killed 15 junta soldiers on Friday while suffering no fatalities themselves. Junta troops responded by burning down 36 houses.

By Monday, the PDF forces were unable to resist the soldiers, the local man said. “The forces were unequal. We had no ammunition, so we could do nothing but watch. It would be better if the NUG could provide us with weapons.”

Myanmar’s underground National Unity Government has declared a “resistance war” against the junta after training and equipping an unspecified number of PDF fighters. But most of the self-organising PDF chapters across the country have had to make do first with traditional hunting rifles and then with weapons seized from defeated junta soldiers.

“We had to sell some of our property and some food to get money, and we cannot buy weapons,” another local resident who is close to the PDF fighters said on Monday. “We also cannot make enough homemade guns. Today we let the situation go.”

Hnan Khar’s residents have fled their village and are struggling without basic necessities, but will continue to resist the junta, he added.

On Sunday morning soldiers raided Htei Hlaw village in Gangaw, set fire to 27 houses and killed a villager and a PDF fighter.