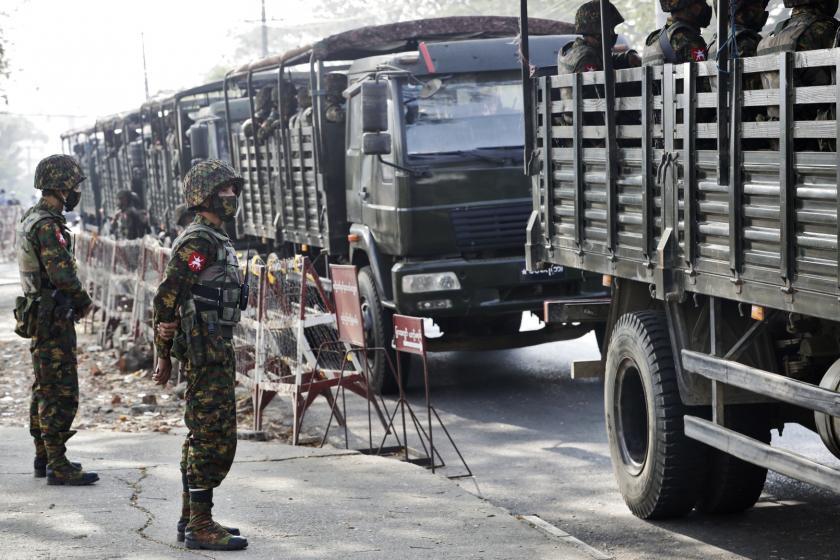 Internet users in at least seven townships in Sagaing and Mandalay regions have been experiencing limited or no service since late Tuesday, according to residents of the affected areas.

The outages appear to affect mobile internet and some Wi-Fi connections in Sagaing’s Pale, Yinmarbin, Kani, Budalin and Ayadaw townships and Mandalay’s Myingyan and Mogok townships. However, some people living in these areas said they still had access at the time of reporting.

The apparent shutdown of internet services comes a week after Myanmar’s shadow National Unity Government (NUG) announced the start of a “resistance war” against the regime that seized power in February.

Most of the townships in Sagaing Region hit by the blackout have seen heavy fighting between the military and local resistance forces in recent months.

According to a senior member of the NUG-backed People’s Defence Force (PDF) in Sagaing, the military has intensified its activities in the region since late last week.

“They have been very active in areas along the Chindwin River, sending reinforcements to battalions based in these areas,” he told Myanmar Now.

A political activist based in Kani Township said that the internet has been unavailable there since around noon on Tuesday.

“I’ve heard rumours that the junta is preparing to launch clearance operations. People rely on social media to get information concerning their safety, so this will make it more difficult for them. The junta is doing this on purpose,” he said.

Ko Nagar, a PDF team leader from Pale Township, suggested that the regime might be targeting online financial services used to fund the activities of resistance forces.

There are four telecom operators in Myanmar: Telenor, Ooredoo, MPT, and Mytel, which is partly owned by the military.

“Ooredoo and MPT SIM-card connections were cut off first. The Telenor connection was cut off just after 2pm. This is likely to be a problem,” said a resident of Budalin Township.

The shutdown also caused concern in Mandalay Region, where residents said they were more worried about the meaning of the move than its immediate impact.

“[Mobile] internet has been down since 2pm. All we have now is cable Wi-Fi. It will be difficult for us to monitor the news. It’s not a problem right now, but it will be if it continues for a long time,” said Mogok resident Hein Maung.

“People don’t feel safe at all now because it seems the military has arranged this blackout because it is about to commit war crimes,” said another Mogok resident who spoke to Myanmar Now on condition of anonymity.

In Myingyan, where the military has been making arrests in the wake of recent attacks on regime targets, the internet has been cut off since around noon on Tuesday.

Meanwhile, residents of Taungdwingyi Township in Magway Region also said they have lost access to the internet. A Mytel telecoms tower was blown up in the township on Sunday.

Towers used by the company have become a frequent target of attacks by dissidents. On September 7, the same day that the NUG declared war on the junta, RFA reported that some 11 Mytel towers were destroyed by guerrilla groups in Sagaing’s Budalin Township alone.

This is not the first time the junta has imposed internet blackouts in areas where it has faced strong opposition.

When heavy fighting broke out between the military and the Kachin Independence Army in Kachin State’s Hpakant Township and Hkamti and Homalin townships in Sagaing Region after the coup, the internet was cut off in these areas for nearly a month.

The regime also imposed tight controls over the internet nationwide in February and March, in an effort to suppress news of its brutal crackdowns on peaceful anti-coup protests.

In 2019, at the height of the conflict between the Myanmar military and the Arakan Army, much of northern Rakhine State lost internet access for more than a year.