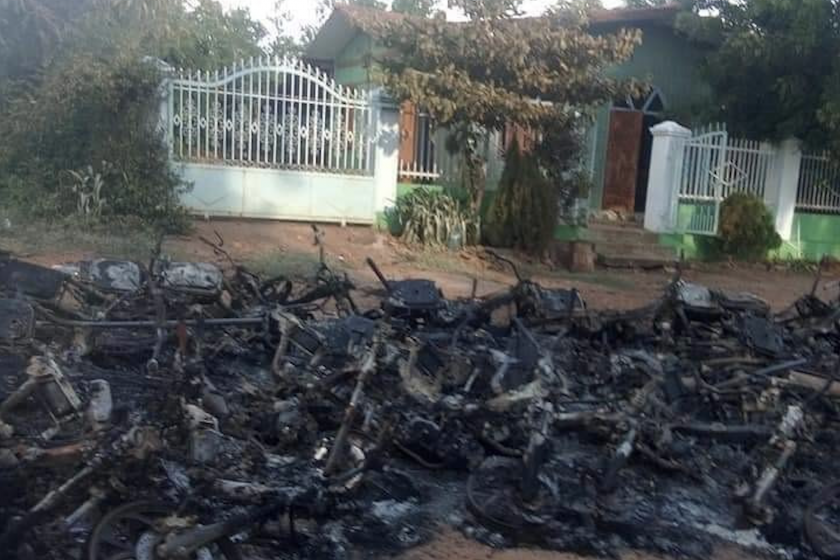 A wounded 26-year-old man is allegedly burnt alive by soldiers, an 18-year-old beaten and shot, and a third man thrown into a nearby dam, according to a member of the local resistance group

Myanmar army troops killed three young men during a raid on a village in northern Myaing Township in Magway Region on Tuesday.

Locals said they did not know why the village of Aye Chanthar Sanpya was targeted. They noted that there had been a clash between the military and resistance forces—the Myaing People’s Defence Force (PDF) and the People’s Revolution Army (PRA)—three miles outside the village on September 9 in which seven junta troops were reportedly killed.

Tuesday’s raid started with the junta troops shooting indiscriminately at people in Aye Chanthar Sanpya at 5am, and while most of the residents managed to escape, a Myaing PDF member told Myanmar Now that three men were captured and murdered.

“One of them was burned alive, one was shot and the other one was killed and thrown into the dam. We still haven’t found his body yet,” said the PDF member.

Two of the victims were identified as 26-year-old Min Min and 18-year-old Tun Myint. The third individual’s name could not be confirmed at the time of reporting.

Min Min was shot in the leg during the raid, eyewitnesses said. Another villager reportedly tried to carry him to safety but ended up leaving him behind in the chaos of the military assault, a villager explained.

The individual said that locals saw Min Min walking with a limp towards a house on the western edge of the village, but moments later they heard a gunshot and the house was later found to have been torched.

“We managed to identify him because the shirt he was wearing was not completely burnt. Several villagers saw him go into the house that was burned down,” the villager told Myanmar Now.

Witnesses saw Tun Myint, another one of the victims, being brutally beaten before he was shot and killed.

“They shot Tun Myint in the back. The bullet went straight through his chest. We found his body in the village. Both the front and back of his head suggested that he was beaten. The back of his skull was even cracked. There were also bruises all over his body,” the villager said.

The Myaing PDF member said that the junta troops also took six villagers captive with their hands tied behind their backs and made them walk ahead of them as they left Aye Chanthar Sanpya that evening.

“They took them with their hands tied to use them as human shields. I think they were worried about the resistance forces on their way back,” he said, adding that the villagers were released on Wednesday.

Before the soldiers left Aye Chanthar Sanpya, they set fire to around 200 motorcycles and a van used locally to provide social services, according to the PDF member.

“We condemn the actions of the military, which has been slaughtering innocent civilians and destroying their property,” Japan Gyi, the spokesperson for the PRA guerrilla group, said.

“I would like to challenge them to fight with armed organisations instead of bullying civilians,” he added.

Aye Chanthar Sanpya is located across the Sagaing Region border from Palal Township. In northwestern Myanmar, battles between the military and local resistance forces have been breaking out in townships throughout Sagaing and Magway regions and in Chin State since the National Unity Government declared war on the junta on September 7.

The junta has terrorised villages in these areas, killing civilians and burning down homes in what locals say is an attempt to crush public support for the anti-dictatorship resistance.