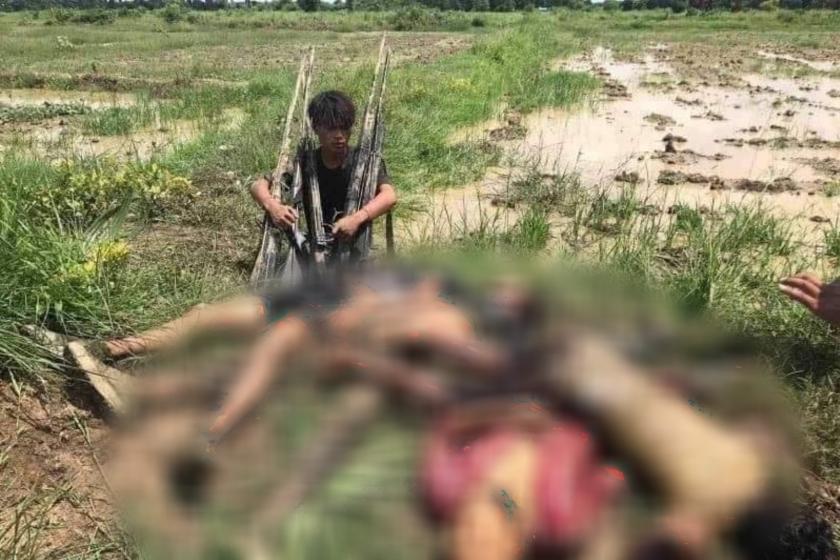 Five members of the anti-junta Chaung-U People’s Defence Force (PDF) were killed in a clash with the military on Thursday near the Sagaing Region town of the same name, according to a leader of the armed group.

The battle occurred in Methekyo village, two miles west of Chaung-U, and the Myanmar army reportedly deployed a helicopter in its fight against the PDF.

After a military-owned Mytel telecommunications tower was blown up by resistance forces around 5 miles west of Chaung-U on Wednesday, the military began raiding villages in the area.

In retaliation, the local PDF launched a guerilla attack against the junta’s troops outside Methekyo in what became an hour-long battle.

“Yesterday, [the junta troops] raided some villages, so the local defence forces carried out landmine attacks against them,” the PDF leader said on Friday, adding that a Myanmar army airstrike soon followed. “They used a Huskie to shoot [from above] and one of us was killed instantly. I think they also had a sniper.”

A 10-second video believed to have been shot in Methekyo village after the clash has since gone viral on Facebook. The video shows a young man with guns being ordered, presumably by junta soldiers, to kneel next to four dead bodies covered in mud and shout “Chaung-U PDF.”

The PDF leader said they were members of his group.

“The bodies were chopped and cut up,” a villager told Myanmar Now on the condition of anonymity on Friday. “This morning their parents picked up the bodies and buried them.”

Myanmar Now has been unable to contact the families of the murdered youths and the detainee pictured in the video.

Locals said that eight junta soldiers were also killed in the clash on Thursday, but Myanmar Now was unable to independently verify the number of casualties, and phone calls to the military council’s spokesperson Maj-Gen Zaw Min Tun went unanswered.

The anti-coup Chaung-U Township Information Committee reported on Friday morning that the Myanmar army soldiers confiscated the motorcycles of some area farmers following the clashes on Wednesday.