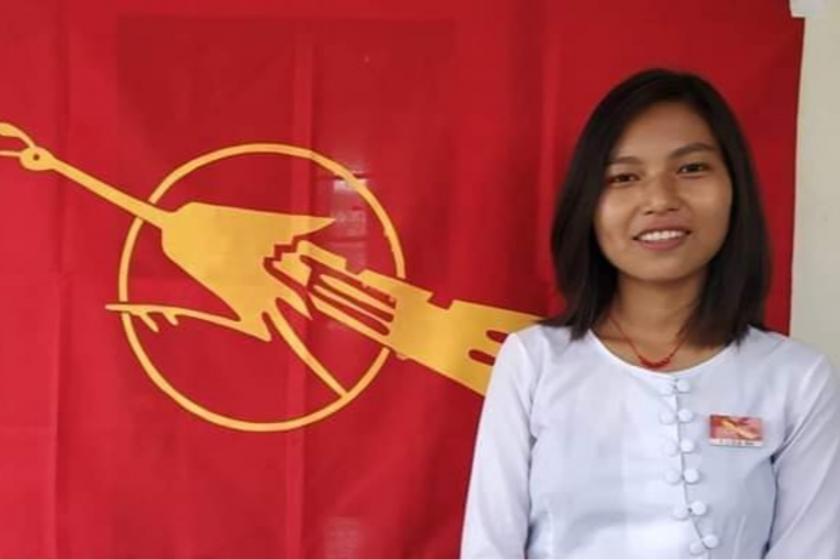 Activists say they fear for the life of a students’ union chairperson after she was detained by junta forces on Sunday afternoon while travelling on a long distance bus.

Aye Nandar Soe, 21, was stopped and arrested at the Yadanabon bridge connecting Mandalay and Sagaing regions. She leads the students’ union at the Sagaing University of Education, where she is in her fourth year of studies.

Her friends say her whereabouts are unknown and believe she was arrested because of her opposition to the military’s February coup. Her detention comes as the junta steps up its crackdown against student and youth activists across the country.

The junta has not made a public announcement about Aye Nandar Soe’s arrest or the grounds on which she is being detained. Many other student activists who were detained recently have been charged with incitement.

“Our comrade Aye Nandar Soe is being detained… but we still do not know where she is being held,” the All Burma Federation of Student Unions (ABFSU), of which Aye Nandar Soe’s union is a member, said in a statement.

“We fear for our comrade Aye Nandar Soe’s life and safety,” the statement said.

An ABFSU spokesperson said he had no information about where she was travelling when she was detained.

The military has stepped up arrests of anti-junta student activists in recent weeks, but the exact number detained is unknown, the spokesperson added.

“Many students from the ABFSU and other students’ unions were arrested, but the ones who were not will continue to revolt against the military,” he told Myanmar Now.

On Sunday three young activists, including two members of the ABFSU, were detained in Yangon and accused of being involved in bank robberies to fund armed resistance against the junta.

According to the Assistance Association for Political Prisoners, at least 1,122 people have now been killed by the junta and 6,698 others are in detention.