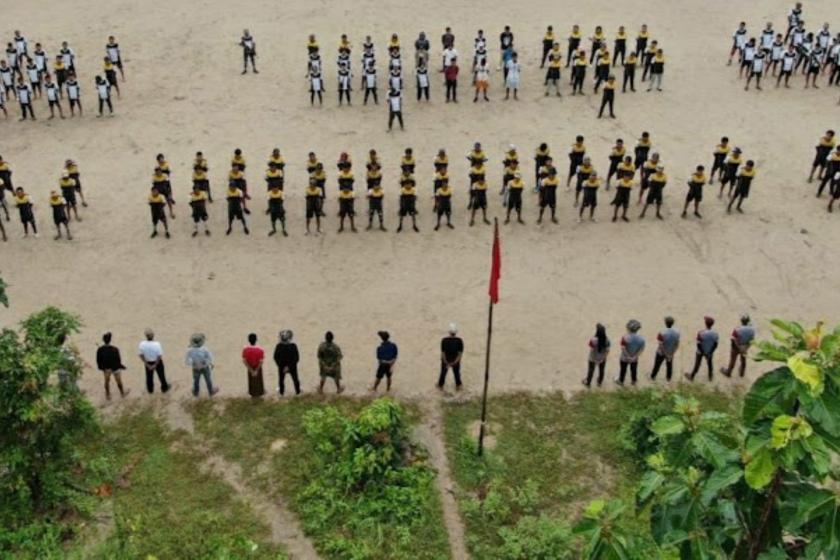 Local guerrilla groups planted the mines on a road in the Sagaing Region township after five members of the Chaung-U PDF were killed by the junta in a clash days earlier.

At least six junta troops were killed in Sagaing Region on Thursday when two military vehicles hit landmines planted by the resistance, according to the Chaung-U People’s Defence Force (PDF).

The vehicles, heading from Mandalay to Monywa, were struck by the Chaung-U PDF and the Monywa-based guerrilla group calling itself “Thanmani and members” in eastern Chaung-U Township at around 8am.

The Chaung-U PDF released a statement later that morning that the left sides of both military vehicles were destroyed and that ambulances arrived at the scene shortly after the blast occurred.

“The cars were destroyed. The military has now started conducting inspections in the region,” a Chaung-U PDF leader said.

An army helicopter also arrived at the scene shortly after the explosion to survey the area and presumably to search for members of the resistance groups, according to Thanmani, the leader of the group under the same name.

“Helicopters have been hovering around… I’ve heard they were going to comb through the entire area,” he told Myanmar Now. “We actually set up nine landmines. Right after the first one exploded, the soldiers came out of the vehicles, panicking. We set the remaining mines off after they got out, so we managed to deal them a great amount of damage this time.”

The Chaung-U PDF has also announced that they will be forming alliances with multiple guerrilla groups to collaborate in overthrowing the military dictatorship.

Five members of the Chaung-U PDF were killed in a clash with the junta’s armed forces on September 16 in Methekyo village, two miles west of Chaung-U town. After a military-owned Mytel telecommunications tower was blown up by resistance forces around 5 miles west of Chaung-U one day earlier, the military began raiding villages in the area.

In retaliation, the local PDF launched a guerrilla attack against the junta’s troops outside Methekyo in what became an hour-long battle.

A 10-second video believed to have been shot in Methekyo village after the clash has since gone viral on Facebook. The video shows a young man with guns being ordered, presumably by junta soldiers, to kneel next to four dead bodies covered in mud and shout “This is the Chaung-U PDF.” He was arrested.

The military council’s troops attacked the local PDF from both land and air during the attack.

An instruction letter from the junta authorities ordering that the security around Mytel towers be tightened, as well as a photo of soldiers setting up landmines near the towers, have since been circulating on social media.