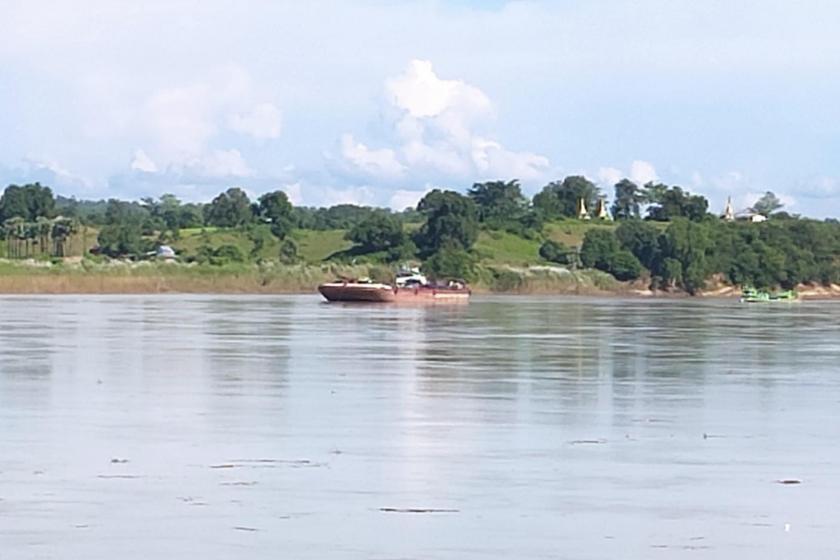 The targeted boats were transporting around 200 soldiers from Ahlone port in Monywa, more than 30 miles south of Kani, according to a KPDF information officer.

He speculated that the junta troops on board were reinforcements for the military units fighting PDFs in Mingin, Kalay and across Chin State.

“We found that the vessel was also carrying weapons and ammunition. Three clashes took place between us and the two vessels. We, the PDF, did what needed to be done,” he said.

The clashes each lasted between 30 minutes and one hour and the attacks were carried out from three different locations on both the eastern and western banks of the Chindwin. Five KPDF members were injured, according to the spokesperson.

“We didn’t use muskets. We used heavy weapons that we crafted ourselves. To be honest, it’s really hard for us to protect the area when we have to use makeshift weapons like this,” the KPDF information officer said.

Some 1,500 locals from the 10 villages along the river fled their homes when the fighting broke out, according to local sources.

Kani locals told Myanmar Now that the two boats continued moving along the river despite the attacks.

The number of casualties on the military’s side was not known.

The series of attacks on the vessels was the first clash between the KPDF and the military since an internet blackout was instituted by the junta in Kani Township on September 14.

According to the KPDF spokesperson, the group had anticipated the communications shutdown and was not acutely affected by it.

The internet blackout, since implemented in a total of 25 townships in Sagaing, Magway and Mandalay regions and Chin State, followed the shadow National Unity Government’s September 7 announcement of the start of a “resistance war” against the coup regime which seized power in February.

Most of the townships in Sagaing Region hit by the blackout have seen heavy fighting between the military and local resistance forces in recent months. Most recently, on September 11, the KPDF attacked the Winmanar police station in Kani but later were forced to retreat after the military launched a strike against them from the air. Days later, the junta sent reinforcements to the township.