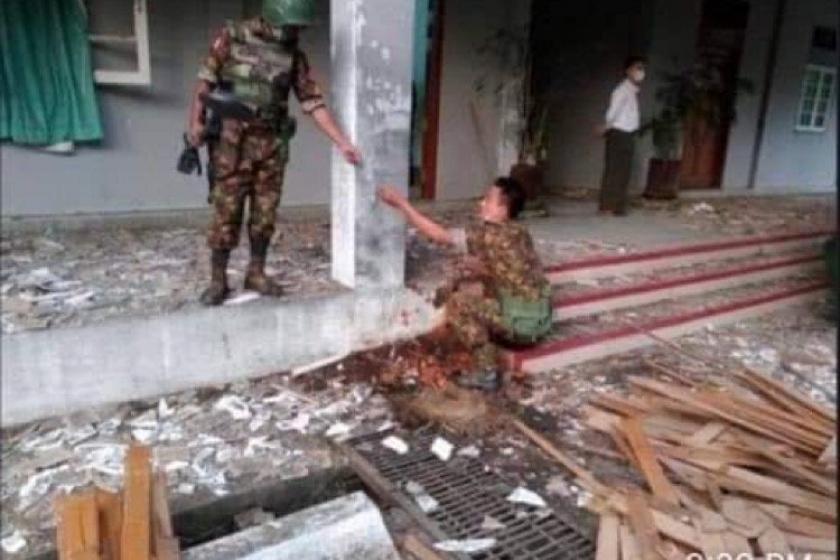 No one was hurt in the blast, which damaged a building and a military SUV

The People’s Defence Force (PDF) in Naypyitaw detonated a bomb at the office of the military’s directorate of procurement on Thursday, damaging part of the building and an SUV.

The PDF carried out the attack on the office in Pobbathiri Township with the help of a second guerilla group, it said in a statement on Friday, though it did not specify which one. No one was killed or injured in the blast.

Ngwe Soe, a spokesperson for the Naypyitaw PDF, said the office was close to the compound of the military’s Naypyitaw regional command. “More major attacks are on the way,” he said. “We have made all the necessary preparations.”

A Toyota Highlander SUV had some of its lights and its windshield destroyed in the blast, a police report on the incident acquired by Myanmar Now said.

The procurement office is under the supervision of a major general. It purchases medicines and other commodities for the military and oversees tenders for products in collaboration with the military-owned Myanmar Economic Corporation, a military officer who has defected since the coup told Myanmar Now.

“My sources told me that the blast took place when they were preparing to transport items they had gotten from tenders,” he said. “An insider was involved. I heard that they are tightening security now.”

The PDF declined to comment on whether an insider was involved.

A Toyota Highlander that was damaged in the attack (Supplied)

The procurement offices gates had been kept closed since the start of Myanmar’s third wave of COVID-19 in June and strict security measures were in place to prevent outsiders from entering, two Naypyitaw residents said.

The military council has not commented on the bomb attack. Spokesperson Zaw Min Tun did not answer calls seeking comment.

Naypyitaw has seen several attacks by anti-junta forces in recent months. In late August the Naypyitaw PDF said it attacked a military column in the capital’s Pyinmana Township and killed an estimated 11 soldiers.

The junta has denied the attack happened but locals confirmed the PDF’s statement.

Thursday’s bomb attack heralded many more to come and far bigger attacks were being planned, the PDF said on Friday.