Junta troops shoot and kill five civilians, including young girl, during raid on village in Sagaing 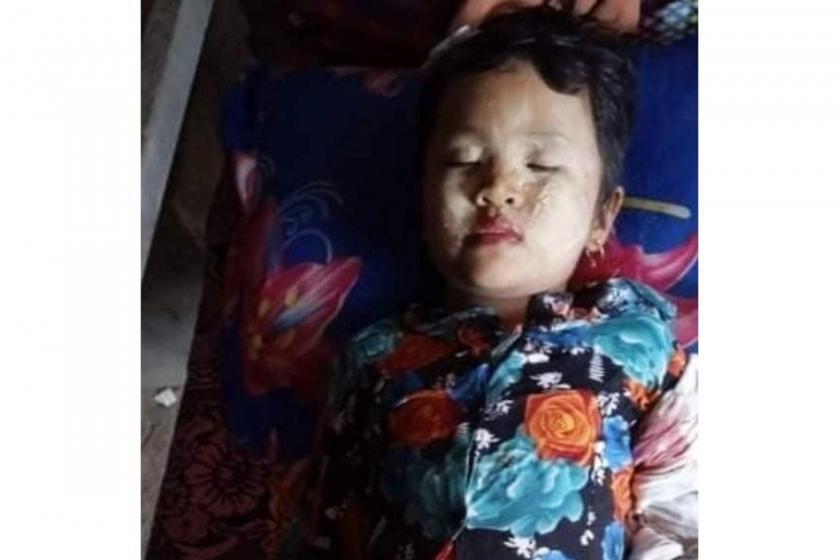 Junta troops shot and killed a six-year-old girl and four other people during a raid on a village in Sagaing Region last week, locals told Myanmar Now.

Around 100 soldiers arrived at Pyin Htaung village, Khin-U Township at 4am on Friday and began shooting. Myo Thandar Hlaing lived in the village with her aunt and was shot trying to escape the raid.

Locals said her father was a soldier serving under the junta and was stationed in Kanbalu, though they did not know his rank. Her mother lives in military housing, they added.

The girl was buried on Saturday and her father did not attend the funeral, they said.

Thirty-year-old Tun Si was also shot dead in the village, while Aung Tun Oo, 38, Ma Pu, 35, and Than Htike, 30, were shot dead in nearby paddy fields. A sixth person who suffered from health problems died of shock during the attack, locals said.

Around 400 people live in Pyin Htaung. When the raid began most fled in panic as soldiers fired their guns, said one of the villagers.

“They started firing shots randomly as soon as they entered the village,” he said. “Those who ran into the soldiers ended up getting shot.”

After the shootings, the soldiers burned down two houses, one of which they suspected had been used as a training site for People’s Defence Force (PDF) fighters. They also ransacked and damaged a house with a National League for Democracy banner hanging outside.

“We need money to be prepared to go to war,” he said. “I think the NUG has not been very productive. It’s not just the PDFs, even the regular civilians are suffering great losses. We would like to urge them to provide more weapons for us.”

At least 1,158 civilians have been killed and more than 7,000 are imprisoned by the coup regime, according to data released by the Assistance Association for Political Prisoners (AAPP) on Monday.

The junta has declared the AAPP an illegal organisation and rejected their data as exaggerated.