As pressure grows in a key region, Yaw people vow to continue the fight 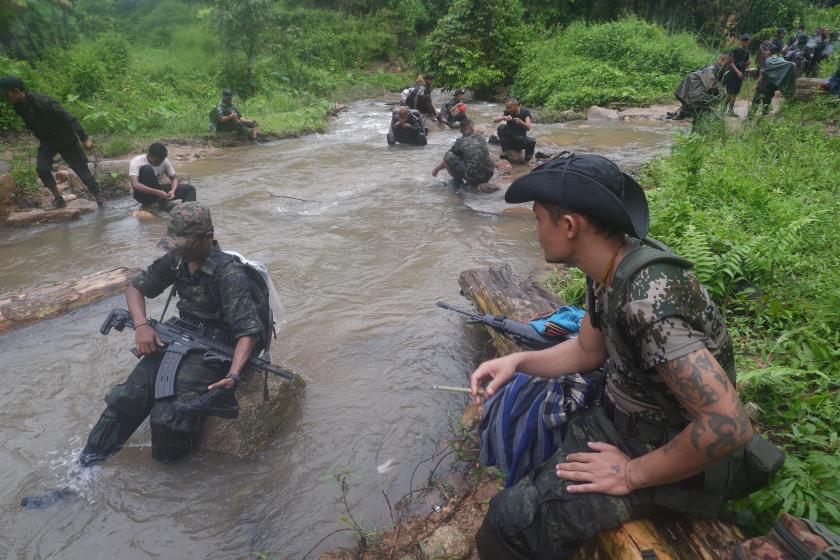 After a month of attacks, the people of northern Magway’s Yaw region say they are more determined than ever to defeat the junta

Tin Myo Win tried repeatedly to talk his 16-year-old son out of joining the resistance movement against Myanmar’s military junta. In the end, however, the resident of Myin Thar, a village in Magway’s Gangaw Township, agreed to let him go.

After making this decision, he took his son, Naing Myo Tun, to a camp on the bank of the Myittha River where other young revolutionaries had gathered to prepare for the coming fight. Then he returned to his home to take his wife and daughter to a safe place at the base of a mountain west of the village.

Before he and his son parted ways, Tin Myo Win pointed out a few spots where Naing Myo Tun and his comrades could hide if necessary. He also told his son to change his shirt so he would be harder to see.

“He was wearing a red shirt, so I made him put on a black one,” he said, recalling his concern for his son’s safety.

Just hours later, however, his fears grew as he heard the sound of artillery pounding the area around the group’s camp. Eventually, he returned to the site to find that the situation there was far worse than he could ever have imagined.

What he found was that his son was not just injured by the shelling, but had also been shot in the head execution-style. Apparently, a leg wound prevented him from escaping, and the troops that overran the camp decided to murder him instead of taking him prisoner.

Naing Myo Tun was one of 18 people—12 of them boys in their teens—who were killed on September 9. More than 30 houses were also torched by the soldiers who unleashed hell on the village of Myin Thar that day.

According to a resident of the village, eight of the victims had been shot at close range. One, a man in his eighties, was covered with bruises and had his hands tied behind his back. Another was tied to a chair.

“I think the soldiers hunted down the survivors of the shelling and shot them one by one,” said the villager, who asked not to be named.

‘Gateway to the revolution’

The assault on Myin Thar was just one of a series of massacres that have been carried out by regime forces throughout the Yaw region since September 3.

The region, which is home to the Yaw people, an ethnic Bamar subgroup that has historically had little contact with related groups living in Myanmar’s central lowlands, encompasses three townships in Magway Region—Gangaw, Htilin and Saw. It borders Sagaing Region and Chin State, and is situated between the Pon Taung Pone Nyar mountain range and the Chin Hills.

Despite its isolation, the region occupies a strategically important position in the struggle between the military junta and resistance fighters based throughout the remote, mountainous reaches of northern Myanmar. This is why villages along the road between Gangaw and Kalay in Sagaing Region to the north have been subjected to violent raids since the beginning of the month.

“Our region is like a gateway to the revolution. That’s why they’re focusing their attacks on us,” said Yaw Lay, a member of the Yaw Defence Force, one of several resistance groups operating in the Yaw region.

“They have been trying to tear us down for a while now. They have even started killing people in groups and burning down villages, because they can’t get control over our region,” he added.

One of the first villages to come under attack was Doenwe, which was raided on September 7, soon after the shadow National Unity Government (NUG) announced that it was calling for all-out resistance against the regime that had seized power in February.

Three villagers were killed by the invading junta troops, who also torched four houses, according to residents. All three victims showed signs of having been tortured, they added.

The next day, the military column that carried out these atrocities proceeded to attack other villages on the Kalay-Gangaw road. Along the way, however, two military vehicles were hit by landmines between the villages of Tharyargone and Htauk Kyant. More than 10 soldiers were reportedly killed.

A member of the Gangaw People’s Defence Force said that the attack was a reprisal for the killing of civilians.

“The more they terrorize the civilians, the more motivated our young people are to overthrow the dictatorship. Even the ones who used to stand by and watch are now starting to join the fight,” he said, adding that the NUG should be doing more to support the local resistance movement.

It was a day after the landmine attack that the military column let loose with its worst assault. After burning down a house in Thar Linn, a village on the eastern bank of the Myittha River about a mile from the Kalay-Gangaw road, it moved on to Myin Thar, which bore the brunt of the army’s ire.

The rampage continued for nearly a week, as village after village—most of them abandoned by their inhabitants by the time the soldiers arrived—was targeted. By September 13, around 100 houses had been torched in the area, while many more were looted.

Many who were unable to flee were tortured and put to death. In Hmwae Lal and Yae Shin, for instance, returning residents discovered five badly bruised bodies. One victim, a mentally disabled man, had his throat slit and his genitals cut off.

At least 35 civilians had been murdered by the middle of the month. But even when there was no one left to kill, the military kept returning to burn down more buildings as a warning to PDF forces who continued to resist.

Hnan Khar, a village that has been subjected to repeated raids, was still coming under attack in late September. Htei Hlaw, another frequent target, was raided on October 1 and occupied for three days. Residents said they found the charred remains of an unidentified body in one of nine buildings that had been torched by the occupying soldiers.

Local civilians say these brutal tactics only serve to strengthen their hatred for the regime and the resolve of those actively fighting against it.

Zin Zin, a 30-year-old resident of Myin Thar, said that her 17-year-old cousin was one of the dozen boys from her village who died on September 9. He and the others who were killed—not in battle, but in cold-blooded murder—had grown up before her eyes.

“I can never forgive them for what they did,” she said. “I will curse them every night for the rest of my life. No matter how much they try to terrify us, we will never give up.”

For Tin Myo Win, who lost his son that day, the feeling runs even deeper.

“I will never forgive Min Aung Hlaing until the end of my days,” he said, referring to the leader of the coup that has thrown the country into chaos.