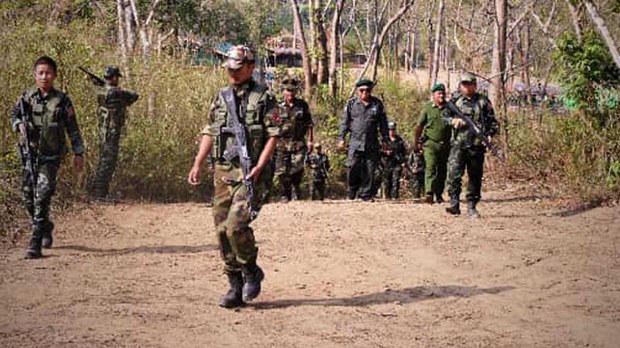 The Chin National Front said it learned of the plans from two recent military defectors.

Myanmar’s military is preparing a major offensive against the Chin National Front (CNF) in Chin state, a representative of the ethnic armed organization (EAO) said Wednesday, prompting a local rights group to warn that such an operation would have a “devastating effect” on the region.

Details of the military plan, which is believed to target CNF headquarters in Chin’s Thantlang township, were revealed amid reports of fresh clashes between junta troops and the Kokang Myanmar National Democratic Alliance Army (MNDAA) in northern Shan state that critically injured six civilians—including a toddler and a pregnant woman—and forced hundreds to flee for safety.

Speaking to RFA’s Myanmar Service, CNF spokesman Salai Htet Ni said the junta is sending tanks and reinforcements in several convoys to Thantlang, where an attack helicopter was seen in the sky on Tuesday, confirming information about the operation that the EAO obtained from military defectors.

He said the offensive had likely been planned in response to the CNF’s support for the shadow National Unity Government (NUG), which on Sept. 7 declared a nationwide state of emergency and called for open rebellion against junta rule, prompting an escalation of attacks on military targets by various allied pro-democracy People’s Defense Force (PDF) militias and EAOs.

“The CNF is, in fact, the first ethnic armed group to reach an agreement with NUG,” Salai Htet Ni said.

“Now that NUG and its political ideology are in line with ours, the military is putting pressure on us more than ever, both militarily and politically.”

The junta has yet to provide evidence of its claims and has violently repressed anti-coup protests, killing at least 1,170 people and arresting 7,240 others, according to the Bangkok-based Assistance Association for Political Prisoners (AAPP).

Salai Htet Ni noted that Dr. Salai Lian Hmung Sakhong, a leader of the CNF, also serves as the NUG Federal Union Affairs Minister and that the CNF has provided military training to both the local branch of the PDF and the Chin Defense Force (CDF), an armed group formed to combat Myanmar’s military in the western state.

According to the spokesman, the CNF obtained a copy of secret plans for the attack on Thantlang as well as extensive details concerning other operations in Chin state from a sergeant clerk named Tin Lian Biak and a driver from the military’s Hakha Tactical Command—both of whom had defected and joined the country’s anti-junta Civil Disobedience Movement (CDM) on Oct. 9.

Salai Htet Ni said he believes that the military is preparing to launch a full-scale offensive against all three of the armed groups because they had joined forces.

On Sept. 11, the CNF and the CDF seized a military base in Thantlang’s Longle village, near Myanmar’s border with India. According to the CNF, 12 junta soldiers were killed, while only six CNF and CDF fighters were wounded in the raid.

Days later, on Sept. 18, clashes between the junta and CNF/CDF joint forces forced nearly 10,000 people to flee Thantlang. According to residents, several homes in the township were burnt to the ground, while a number of civilians were injured and a local pastor was shot dead during the fighting.

Meanwhile, the military and the CNF clashed Wednesday near Falam township, the spokesman said, although details of the fighting were not immediately available.

Salai Za Op Lin, deputy executive director of the Chin Human Rights Organization (CHRO), said that the information provided by Tin Lian Biak suggests that the residents of Chin state are at grave risk of danger.

“The sergeant who defected to the CDM movement brought a lot of documents with him, including secret information about how they would launch the attacks and what weapons they would use,” he said.

“It looks likely that they are preparing a major military operation focused on Chin state.”

Salai Za Op Lin did not provide any details about the documents Tin Lian Biak delivered to the CNF but said that five members of the man’s family—including his mother—were arrested by the military on Monday in connection with his case.

Military spokesman Maj. Gen. Zaw Min Tun had yet to comment on reports of troop reinforcements and the intelligence documents obtained by the CNF as of Wednesday.

Meanwhile, residents of Northern Shan state’s Mong Koe sub-township told RFA that at least six civilians—including a two-year-old girl and a pregnant woman—were critically injured in fresh fighting between junta troops and the MNDAA near Ywa Thit in No. 6 ward on Tuesday.

According to the father of the injured toddler, junta forces attacked MNDAA troops with heavy artillery from a hilltop above Ywa Thit, damaging homes and wounding his daughter, as well as two men and three women in the area.

“The clash started in the lower part of our village. After that the two sides exchanged heavy fire,” said the man, who spoke on condition of anonymity, citing fear of reprisal.

“We don’t know where the shell came from as we did not dare to go out. My daughter is still conscious, but I don’t know if her brain was affected. She will be taken to Mandalay Hospital for treatment.”

A relative of one of the wounded, who declined to be named for security reasons, said that altogether three of the injured were transferred from Muse Hospital to Mandalay Hospital on Wednesday afternoon.

“The young girl who was sent to Mandalay has regained consciousness—she understood what we were saying but she could not respond,” the relative said.

The fighting displaced 74 families consisting of at least 410 people from Mong Koe, residents said, adding that most of them are currently sheltering near Myanmar’s border with China.

They said Chinese authorities have been using loudspeakers to warn refugees not to approach the border fence.

A spokesman for the MNDAA told RFA that details of the fighting were not immediately clear.

Fighting between the military and the MNDAA resumed in early August in Mong Koe and Pangsai sub-townships. According to reports from both sides, at least 10 people have been killed or wounded in the clashes so far.

Including the more than 400 people who fled Tuesday’s fighting, there are now nearly 3,000 people displaced by fighting in Mong Koe township alone.

The United Nations Office for the Coordination of Humanitarian Affairs (OCHA) said in September that more than 120,000 people have been displaced by fighting since May 21 in Kayah and southeastern Shan states, as well as tens of thousands in Chin, Kachin, and Karen states, as well as Magway and Sagaing regions.

In late August, OCHA announced that the number of people who need humanitarian aid in Myanmar had increased to nearly two million since the military coup. Those displaced by the recent fighting join more than 500,000 refugees from decades of conflict between the military and EAOs who were already counted as IDPs at the end of 2020, according to the Internal Displacement Monitoring Center, a Norwegian NGO.