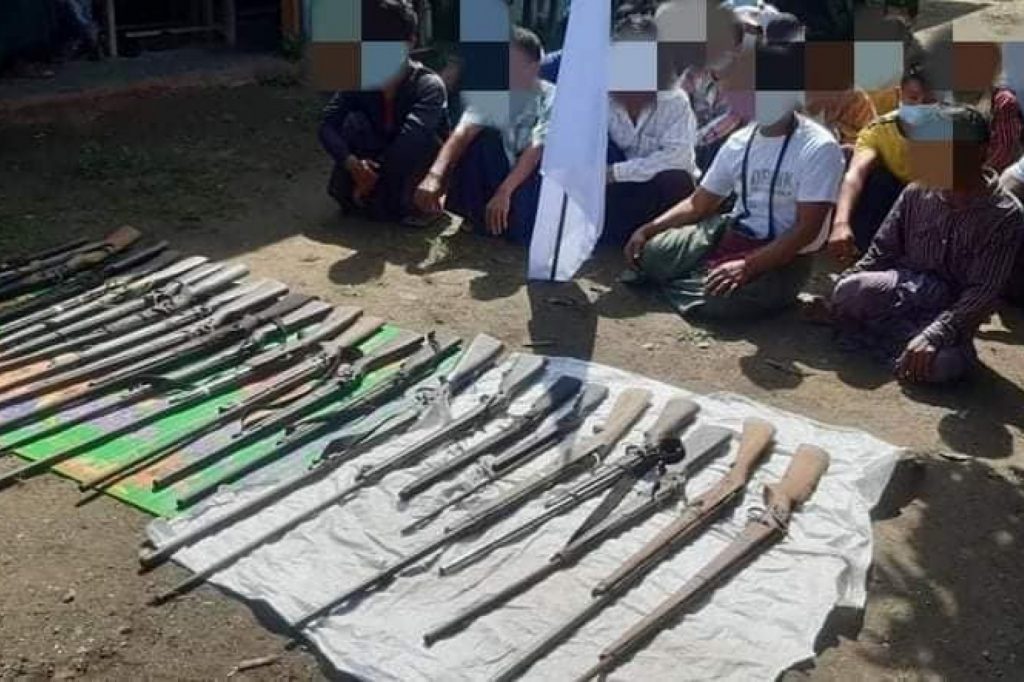 About 30 members of the military-backed Pyu Saw Htee group surrendered to resistance fighters in upper Myanmar’s Yaw region on Thursday and handed over muskets given to them by the military.

The group surrendered in Htilin Township, Magway Region, after coming under attack from the Yaw Defence Force (YDF) and receiving no protection from the military, said an officer from the Htilin branch of the YDF.

“We’re still monitoring them as we can’t trust them yet,” he told Myanmar Now. “They came from nearby villages.”

The Pyu Saw Htee collective was formed with supporters of the military in the wake of the February 1 coup with the aim of undermining anti-dictatorship forces with threats and violence.

Those who surrendered in the Yaw region have signed a pledge promising to stand with the people, the YDF officer said.

The military offered no help to Pyu Saw Htee in the wake of the attack and so the Pyu Saw Htee members decided to surrender, the YDF officer said.

“The military council did not show at all and the Pyu Saw Htee members realised that the military could not provide protection for them. So they came to us,” he said.

The muskets that the Pyu Saw Htee members surrendered with were originally confiscated from resistance fighters by the military, he added.

“They were given those weapons by the military to fight back against the PDF,” he said, referring to the People’s Defence Force.

The Pyu Saw Htee members who surrendered to the YDF have threatened local resistance fighters and passed information about them to the military, he said.

“They even requested weapons from the police. They’re still in the preparation phase. No regular civilian would have access to weapons from the military council. But they claimed that they became members of the Pyu Saw Htee unknowingly,” said the YDF officer.

Locals are also suspicious of the intentions of those who surrendered.

“They formed the group because they did not like the defence forces in the first place. It appears that they were only surrendering because they were afraid for their lives as the military council units closest to Htilin cannot provide them protection,” said a Htilin resident.

Junta spokesperson Zaw Min Tun claimed during a press conference on September 15 that Pyu Saw Htee was not formed by the military and did not receive any training or weapons from it.

Late last month junta soldiers set fire to five houses in the village of Htanpinkone, in Htilin, because they suspected resistance fighters were staying there, according to the YDF.

Local resistance groups clashed with soldiers in Htilin in May and June.

The junta has deployed thousands of troops to Chin State and Sagaing and Magway regions in recent weeks in what appears to be preparation for major offensives against resistance groups, which have inflicted severe casualties against junta forces since the coup.