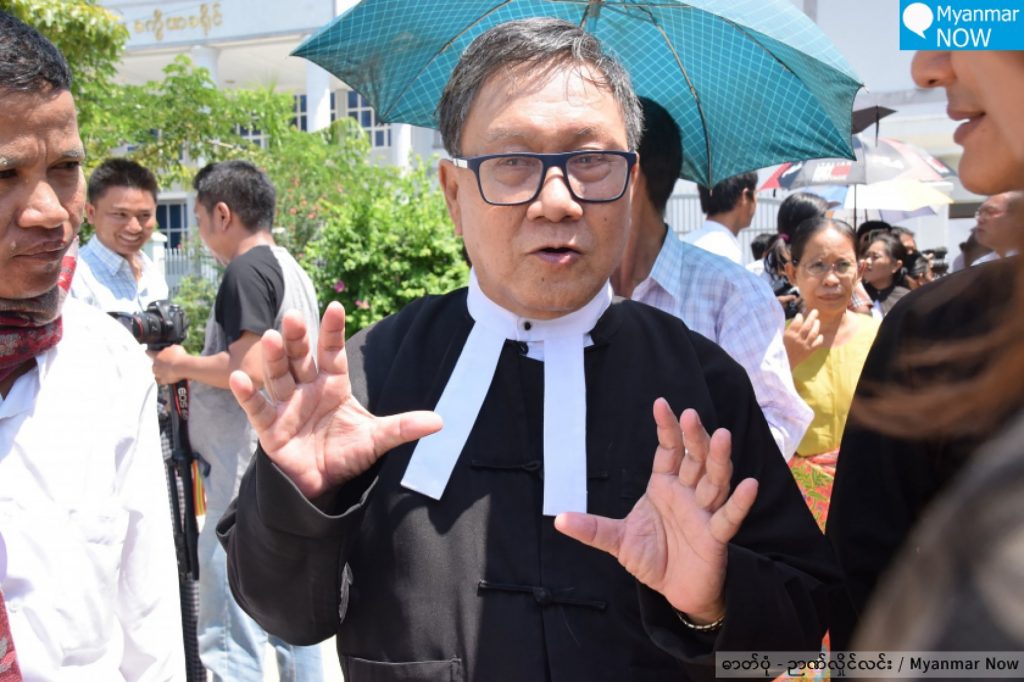 Lawyer Khin Maung Zaw is prohibited by a local administrator from talking about the legal cases against the ousted NLD leadership with international envoys, organisations or media

The lead defence lawyer for detained State Counsellor Aung San Suu Kyi and President Win Myint’s legal team has been slapped with new restrictions barring him from speaking publicly about the criminal cases against his clients.

Lawyer Khin Maung Zaw had his right to disclose information regarding his clients’ court hearings revoked by the local administrator for Napyitaw’s Pyinmana Township on Thursday, who did so by sending a letter of notice invoking Section 144 of Myanmar’s Code of Criminal Procedure.

The statute allows for a lawyer’s right to disclose information to be restricted if their comments could cause a person “annoyance or injury” or “a disturbance of the public tranquility,” according to the code.

The restrictions will prevent him from talking with international envoys, organisations or media about the cases against Suu Kyi and Win Myint, who have been in junta custody since just before Myanmar’s February 1 military coup which ousted their National League for Democracy (NLD) government.

On Tuesday, Khin Maung Zaw shared with the media court testimony delivered by Win Myint regarding threats made against him by the military on the day of the coup.

The shadow National Unity Government’s justice minister Thein Oo condemned the restrictions placed against Khin Maung Zaw and said that the Pyinmana Township administrator had overstepped his authority, explaining that only a judge could revoke the legal right in question.

“This is a matter of the court and it has nothing to do with the township administrator,” Thein Oo said.

Myanmar Now was unable to obtain comment from the five lawyers on the NLD leadership’s legal team regarding the order against Khin Maung Zaw. Another member of the team, San Marlar Nyunt, similarly had her right to disclose information restricted by the junta authorities in August.

The military council has released no statement on the issue.

President Win Myint was arrested just prior to the coup on February 1. Cases were filed against him for violation of the Section 505b of the Penal Code for incitement, and for violating the Disaster Management Law for holding political rallies ahead of the 2020 general election during the Covid-19 pandemic.

It is not known where the leaders are being held, but their hearings have been held in a specially designated court in Naypyitaw’s Ward No. 1, with the junta’s district and township judges presiding.