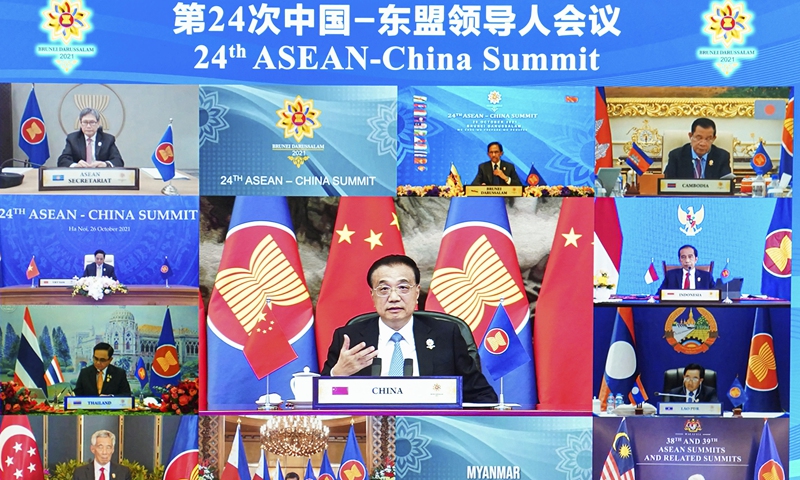 China a ‘mediator’ between ASEAN and Myanmar squabble: experts

Cooperation with China has become indispensable for ASEAN as the bloc is facing new challenges of saving their economies that have been ravaged by the COVID-19 pandemic, its stability and security challenged by a turbulent Myanmar and by the US, which is pressuring countries within the bloc to take sides, said experts on Tuesday as ASEAN convened a series of summits aimed at economic recovery.

Member countries of the Association of Southeast Asian Nations (ASEAN) on Tuesday kicked off summits under the chairmanship of Brunei via video link. Scheduled to run from Tuesday to Thursday, the ASEAN Summits and related summits will also be joined by leaders from ASEAN’s dialogue partners, including China, Japan, South Korea, India, US, Australia and Russia, among others.

Chinese Premier Li Keqiang made remarks via video link during the summit on Tuesday, urging to expedite the negotiations of the Code of Conduct in the South China Sea (COC) and strive for its early conclusion. Li said that China will work with ASEAN to officially launch a joint feasibility study to identify other areas for possible inclusion in further enhancing the ASEAN-China Free Trade Area (ACFTA).

Li’s stressing the need to expedite the COC negotiations showcases China’s urgent need and determination of inking the deal, as the South China Sea issue has been increasingly hyped by extraterritorial countries, Chen Xiangmiao, assistant research fellow at the National Institute for South China Sea Studies, told the Global Times on Tuesday.

Yet Chen said that as South China Sea stands as an issue of uncertainty in bilateral relations between China and ASEAN, the strong momentum of cooperation has eased concerns.

As ASEAN is being confronted with challenges such as the continuing COVID-19 pandemic, turbulence in Myanmar and being caught in the middle of the US’ rivalry with China, all of which endangers the bloc’s tranquility, analysts predicted this year’s summit will focus on fighting COVID-19, economic recovery, regional security and Myanmar.

“Since the onset of the pandemic, China has closely cooperated with ASEAN by providing more than 190 million doses of vaccines, and trade momentum has remained strong in the first three quarters of this year,” Xu Liping, director of the Center for Southeast Asian Studies at the Chinese Academy of Social Sciences in Beijing, told the Global Times on Tuesday.

Zhang Jie, a researcher from the National Institute of International Strategy from Chinese Academy of Social Sciences, said that despite the COVID-19 flare-ups, China and ASEAN are seeing a steady increase in cooperation in various fields, including pushing for early implementation of the Regional Comprehensive Economic Partnership (RCEP) trade deal, cooperation on the digital economy and climate change.

Moreover, the two sides are also experimenting with a post-pandemic recovery model, including building a fast and green channel for people and commodities, and negotiating on mutual recognition of health codes, media reported.

“China attaches great importance to bilateral relations with ASEAN, and always supports the bloc to play a central role in regional cooperation,” Xu pointed out, noting that in sharp contrast, the US does not value such a principle, as it only deems ASEAN as part of its Asia-Pacific Strategy to counter China.

US President Joe Biden also took part in the virtual summit with the ASEAN on Tuesday, the first time in four years that Washington engaged at the top level with the bloc after Biden’s predecessor, Donald Trump, attended an ASEAN-US meeting in Manila in 2017.

The White House said on Monday that Biden would discuss the “enduring” US commitment to ASEAN’s central role in regional affairs and new initiatives to strengthen the US strategic partnership with the bloc, “as we work together to end the COVID-19 pandemic, address the climate crisis, promote economic growth, and address a range of other regional challenges and opportunities,” Reuters reported.

Since Biden took office, the US has doubled down on its efforts to woo ASEAN members, including sending several high-level officials, including Secretary of State Antony Blinken, to tour those countries and peddle the “China threat” theory, said Chen.

The expert noted that in contrast to the “beautiful promises” Washington made for those countries, its backing of AUKUS, which includes an agreement to enhance Australia’s defense capacity through technology transfer of nuclear-powered submarines and other underwater capabilities, has bogged the region down with fear of nuclear threats and an arms race.

ASEAN’s attitude toward AUKUS differs, as Malaysia and Indonesia strongly object, while the Philippines welcomes it with open arms.

Although the US has constantly assured ASEAN members that it will not force them to take sides, the forming of AUKUS proves that US promises are always hypocritical, said Chen, explaining that ASEAN members’ key geographic position means they will inevitably become embroiled in the rivalry.

The bloc has learned from its traumatic history that turbulence and conflict can only  bring damage to its development, said Chen. He noted that the region is increasingly seeing the US, which is obsessed with marshaling allies in the Indo-Pacific region more as a “destabilizer and troublemaker,” rather than as a “protector.”

“Moreover, the bickering and conflicts of ASEAN members over AUKUS should teach Washington a lesson about how difficult and naive it is for it to form an alliance against China in the Indo-Pacific region,” Chen said. 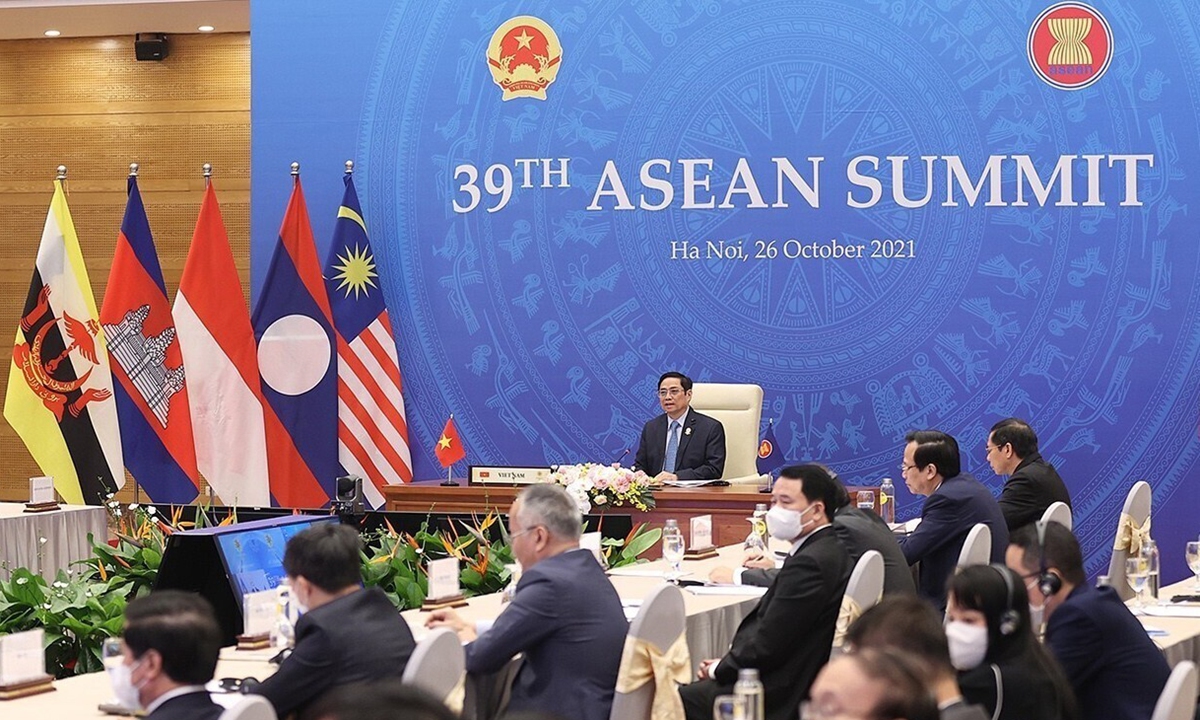 A turbulent Myanmar has become another factor that threatens the region’s solidarity. The leaders’ summit began without Myanmar, after its military refused to send a representative to the three-day meeting in protest over the exclusion of its top general.

ASEAN said it would accept a non-political figure from Myanmar, but the military on Monday rejected that, saying it would only agree to its leader or a minister attending.

This has been seen by foreign media as a “rare bold step by a regional grouping known for its non-interference and engagement,” and “unprecedented snub to the leader of a member state.”

Yet Chinese analysts pointed out that the gap between Myanmar and the bloc may not as deep as those foreign media has hyped. “It’s too early to conclude that ASEAN has abandoned its decades-long noninterference policy,” said Xu, noting that the major discrepancy lies in the implementation of a five-point consensus reached in April by ASEAN leaders regarding the situation in Myanmar to help different parties in Myanmar find a political solution within the constitutional framework through dialogues.

The five-point consensus, aiming to de-escalate Myanmar’s situation, includes calls for a cessation of violence and for a special envoy to be granted access to the country.

Currently, ASEAN believes that Myanmar’s military failed to carry out the consensus, especially granting a special envoy access to meet with other parties in Myanmar, yet Myanmar hopes to push forward the implementation step by step, Xu said.

The expert said that Myanmar has sent positive signals to the bloc by freeing hundreds of political prisoners in recent days, including Aung San Suu Kyi’s party spokesman before the summit.

Experts said that China can serve as a “mediator’ of the Myanmar situation, and they believe that it is significant for China to first uphold the solidarity of ASEAN, then, under this principle, promote negotiation between ASEAN and Myanmar, and promote peaceful and stable development in Myanmar, which is in the common interests of Myanmar, ASEAN and the whole region.