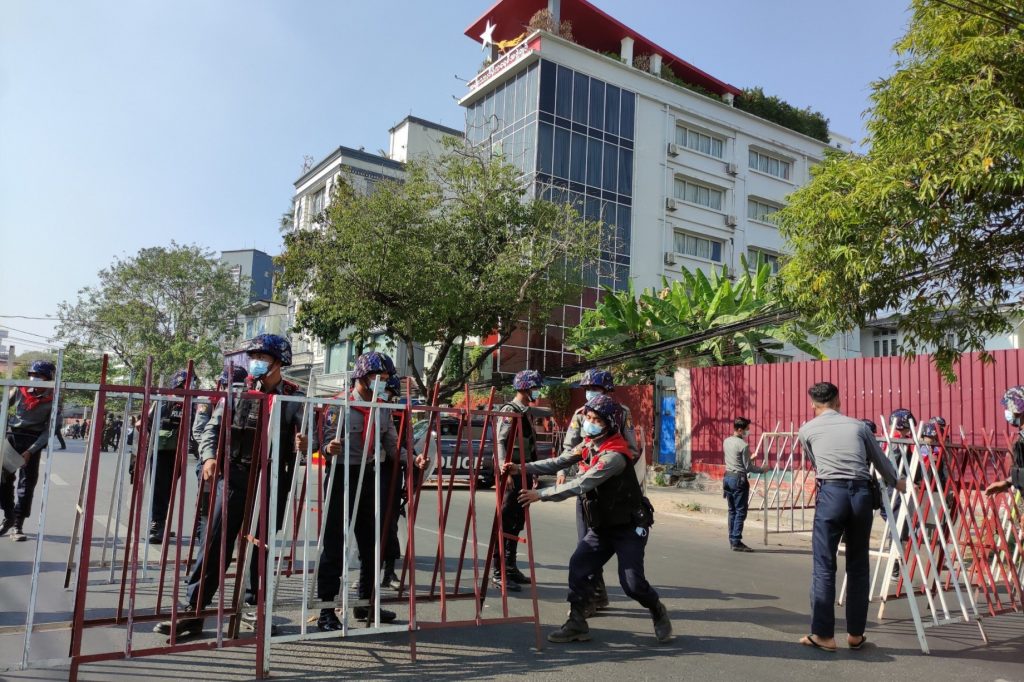 ‘Only the military council and their armed forces could be responsible for these attacks,’ an NLD spokesperson says

Offices of the National League for Democracy (NLD) across Myanmar have been attacked on more than 50 occasions since the February 1 military coup that ousted their elected administration, according to figures compiled by Myanmar Now.

The party’s offices in Sagaing, Mandalay, Ayeyarwady, Bago and Tanintharyi regions and in Mon and Karen states have all been targeted presumably by the military and its allies, according to Kyaw Htwe, spokesperson for the NLD’s central executive committee. The largest number of assaults—18—have taken place in Mandalay, he added.

“All of these incidents took place late at night when only the junta’s soldiers could go out due to martial law,” Kyaw Htwe told Myanmar Now. “Therefore, one could say that only the military council and their armed forces could be responsible for these attacks.”

Kyaw Htwe added that several eyewitnesses have reported seeing soldiers and police breaking fences, doors and signboards, and tearing vinyl banners and party flags. In some instances, the attackers broke into and looted the offices, torching the interior and even setting off grenades.

The party documented 47 attacks on their offices in the past nine months, but Myanmar Now’s research revealed 51 in total.

The four additional assaults not included in the NLD’s original list occurred at the Mingalar Taung Nyunt in Yangon in March; in Monywa, Sagaing in April; in Madaya, Mandalay in July; and at the Kawthaung NLD office in Tanintharyi in October.

On October 21, the NLD’s regional office for Tanintharyi in Dawei was also bombed at around 3am, destroying the entire two-storey building.

Two days later, bombs exploded at party offices in three Mon State townships—Kyaikhto, Bilin and Thaton. On October 27, the NLD regional office in Mandalay, which had been previously sealed off by the military, was also bombed.

Fifteen troops fired shots at and broke into the Kyunhla Township NLD office in Sagaing Region on Saturday, according to a local cited in the Kachin State-based 74 Media.

The NLD office in Bilin Township, Mon State, pictured after an explosion on October 23 (CJ)

NLD spokesperson Kyaw Htwe described the attacks on the offices as an attempt to shatter the public’s political aspirations and crush the anti-dictatorship resistance.

“The party offices were built with funding from party members and 25 percent of the MPs’ salaries, as well as donations from supporters. Destroying those offices is essentially destroying the people’s hopes and dreams,” he said.

On Monday, junta spokesperson Gen Zaw Min Tun was quoted in a BBC report denying that the military had been involved in the attacks on the NLD’s offices, and said that the coup council was investigating the incidents.

“The situation is very suspicious, I must say. I suspect that the extremists might be blowing up the offices themselves to trick the public,” he said, referring to the anti-coup armed resistance movement.

As a pretext for the coup, the military accused the NLD of committing voter fraud in the 2020 general election. In May, Thein Soe, the chair of the junta-appointed Union Election Commission, accused the NLD government of inflating voter lists, allowing those without identity cards to cast ballots, and using advance voting to benefit their party.

He suggested that the military authorities would be disbanding the NLD and prosecuting the party for treason, but did not give a date as to when legal action would be taken.