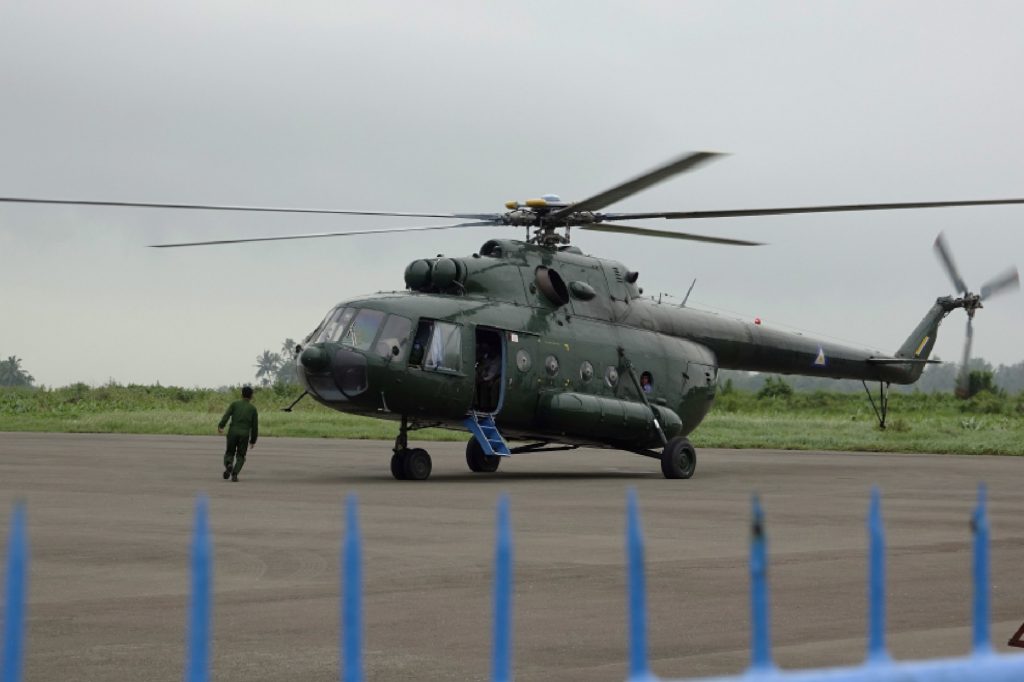 Troops arriving in five helicopters terrorise three villages in the Sagaing Region township in one day, displacing hundreds of residents

Myanmar army soldiers sent by helicopter to Sagaing Region’s Depayin Township raided three villages on Tuesday where locals say there have been no clashes between the junta and resistance forces.

The approximately 100 troops in question had been occupying the school in the 100-household Winyan village since arriving in five helicopters on Monday.

They proceeded to raid Winyan, Kone Yoe and Tatti villages the following day, a man from WinYan said. He explained that the soldiers first torched a home in Winyan at 7am, then four more in 80-household Kone Yone, before raiding and setting fire to homes in Tatti.

“They just ransacked entire villages and torched the houses. I was in the woods when they started raiding the village and I saw the smoke,” the villager said.

Hundreds of residents from Winyan, Kone Yone, Tatti and two other nearby villages fled their homes when the raids began, and at the time of reporting, were still unable to return.

“It was completely lawless. There was no armed resistance in our area, yet they torched the villages anyway,” the man from Winyan said.

Another villager from Kone Yone said no locals had stayed behind.

“There’s nothing much to say other than that we are very scared,” he told Myanmar Now.

Myanmar Now tried to call junta information officer Gen Zaw Min Tun for comment on the allegations that the military was raiding and burning homes in Depayin, but the calls went unanswered.

The junta’s armed forces have been carrying out airstrikes in Sagaing Region in an effort to crush the resistance movement in northwestern Myanmar, and sending reinforcement troops by helicopters to areas where local defence forces are believed to be operating.

Locals said an air assault on western Kyunhla Township in Sagaing on October 28 was an attempt to destroy PDF bases the military assumed were located there.

Around 100 junta soldiers have been occupying Kar Paung Kya village in Sagaing’s Taze since mid-October, with the military twice sending ammunition and supplies to the troops by helicopter. Nearly the entire population of the village has fled as a result of the occupation, with the troops torching homes in the community as well as huts on its outskirts where displaced locals had sought shelter.

In August, a three-day military raid on villages in eastern Depayin Township forced thousands of locals from around 20 villages to flee their homes.

Previously, a clash between the military and the local People’s Defence Force (PDF) broke out in Depayin’s Satpyarkyin village on July 2, killing 31 people, including PDF members and locals.