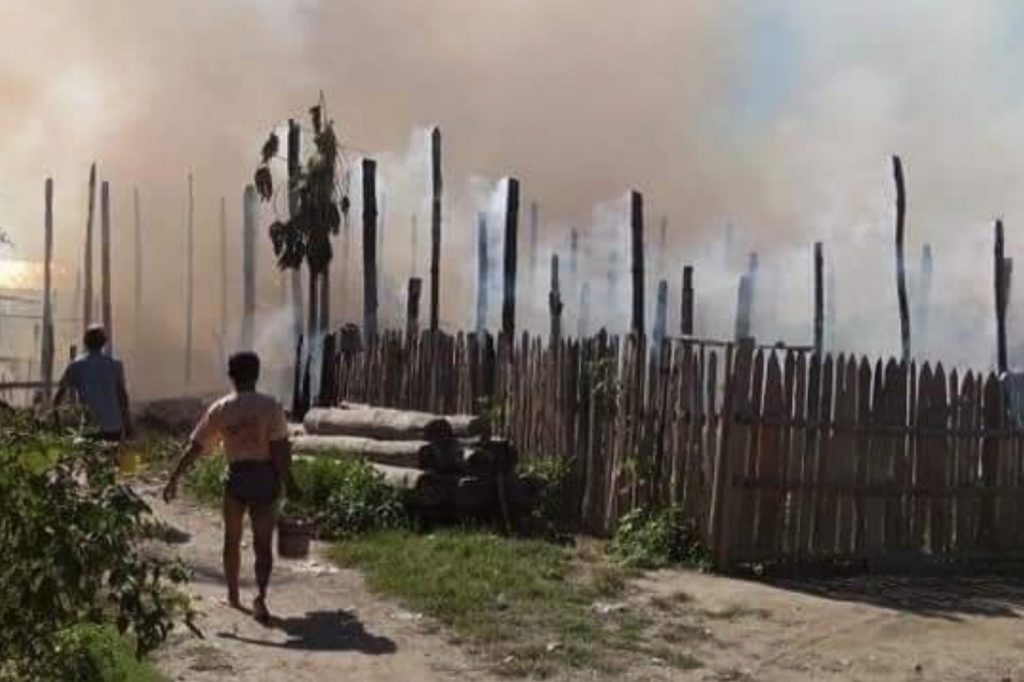 Soldiers burned down 12 houses and fired guns and artillery at fleeing residents in a village in northern Sagaing Region’s Katha Township on Monday after their infantry column was ambushed by People’s Defence Force (PDF) fighters.

At least 20 junta soldiers were killed when the Kathta PDF intercepted their column as it marched near Moedar Lay village. After the clash, the surviving soldiers entered the village and began burning homes that they thought belonged to PDF members, a local woman said.

A 40-year-old local man told Myanmar Now that a 5-year-old child was injured in the shoulders and back by shrapnel after the troops launched shells at the village.

Around 1,000 of the village’s 1,500 residents fled as soldiers fired more artillery at them, he added. “We live on the riverbank, and when it started we fled on motorboats across the river. The soldiers actually fired three shells at us while we were fleeing. They fired gunshots as well.”

Moedar Lay sits on the western bank of the Ayeyarwady river, about 20 miles northeast of the town of Katha. The village is home to a regional hospital.

A video published on social media showed fires burning in the village from afar as gunshots and artillery explosions are heard in the distance.

The day after the attack on Moedar Lay, clashes erupted between the PDF and junta troops five miles away, near the village of Weagyi, the local man said. Then on November 10 the military sent reinforcements on boats to Moedar Lay.

Soldiers remained stationed in schools and monasteries in Moedar Lay as of Thursday. “They told the villagers to leave within two days or they’d torch the village again,” said the local woman.

Junta spokesperson Zaw Min Tun could not be reached for comment, nor could the Katha PDF.

Moedar Lay lies in a strategically important area near the border with Kachin State. The military uses the river to transport supplies and reinforcements to fight the Kachin Independence Army (KIA), but since the coup its boats have been repeatedly ambushed near Moedar Lay.

The junta has faced heavy losses in recent months in Sagaing, where newly formed PDF groups have teamed up with the KIA to launch attacks against its forces.