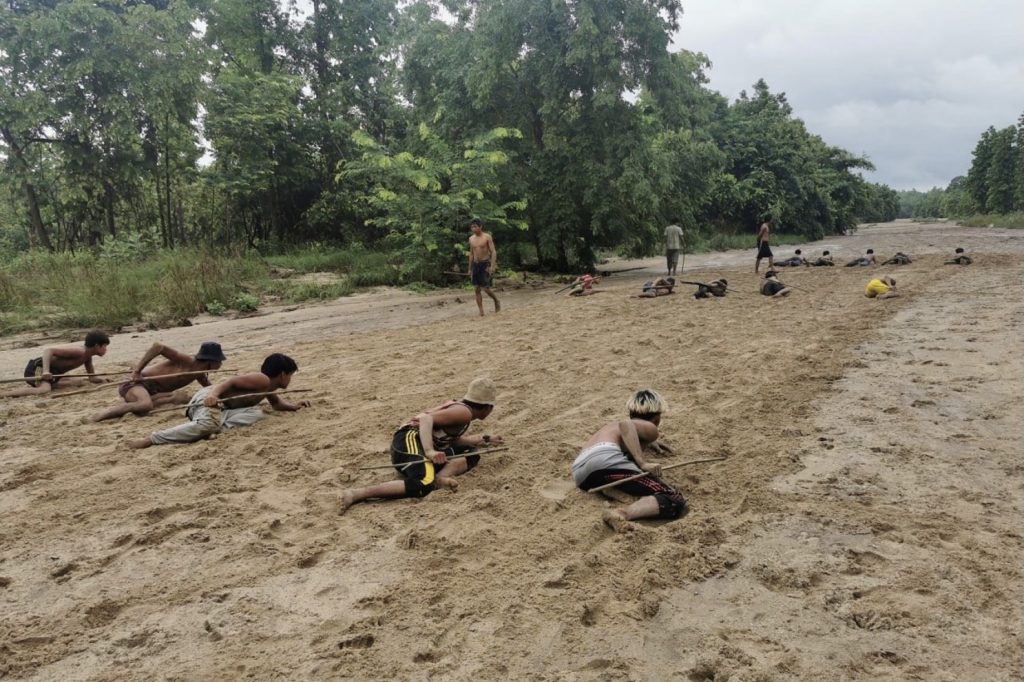 The military has recently escalated raids on villages in three Sagaing Region townships where resistance forces are concentrated, displacing thousands of locals.

Since late October, the junta has been sending weapons and troop reinforcements to Depayin, Kani and Kyunhla townships, as well as launching increased airstrikes since early November on areas where People’s Defence Forces (PDFs) are believed to be located.

Intense battles broke out between the military and the Kani PDF near Tazeichaung village on Wednesday, with the junta troops firing on the area from a helicopter, reportedly injuring three locals.

“They shot at the road at the exit of Tazeichaung from a helicopter, using machine guns,” an eyewitness told Myanmar Now, adding that the aircraft circled the area four times.

The junta sent 50 troops, as well as food and several heavy weapons to Kani from Mingin Township in early November, according to the Kani PDF, claiming that among the soldiers were members of the Pyu Saw Htee pro-military network that has vowed to crush the anti-coup resistance.

Five junta soldiers and four PDF members were injured in the battle near Tazeichaung, a spokesperson for the Kani PDF said.

Although there have been no recent clashes between the Myanmar army and resistance forces in Depayin, junta soldiers arrived in the township in five helicopters on Monday and began carrying out raids on villages in the township.

Some 2,000 residents from more than 10 Depayin villages, including Win Yan, Kone Yoe, Tatti, Inboke and Myakanthar, have been displaced as well.

“We are still very scared to go back home. Even if we are attacked on the ground, we can still manage to run away, but if the attacks come from the sky, there’s not much we can do,” a villager from Inboke said.

“Even a slight noise from the sky frightens us to the core,” he added.

The military also carried out an airstrike near Kywete village west of Thapanseik dam in Kyunhla Township on October 28 in what locals said was an attempt to destroy PDF bases they believed to be located there. The junta deployed some 200 soldiers to the area, as well.

The spokesperson for the Kani PDF speculated that the military has started to rely more heavily on airstrikes after facing frequent ground attacks by the PDF using explosives.

“Another reason could be because they wanted to scare the people by demonstrating what weapons they have,” he said, adding that heavy weapons could be fired from military bases in Monywa and still hit townships like Kani, some 60 km away.

“It doesn’t matter if they try to scare us with jets or tanks. Our revolution is based on our morale. We have given up our lives and everything to fight against them,” he added.

Although some PDFs have managed to obtain rifles from ethnic armed organisations, they remain outgunned by the military, with most relying on traditional hunting muskets and other handmade guns with limited firepower.

Intensified attacks on Sagaing Region and Chin State have followed rumours that the military council is launching an offensive known as “Operation Anawrahta” in northwestern Myanmar aimed at crushing resistance forces that have challenged their rule in these territories.

The military has also cut off mobile internet services to more than 20 townships in the region where the presence of armed resistance forces is strong.