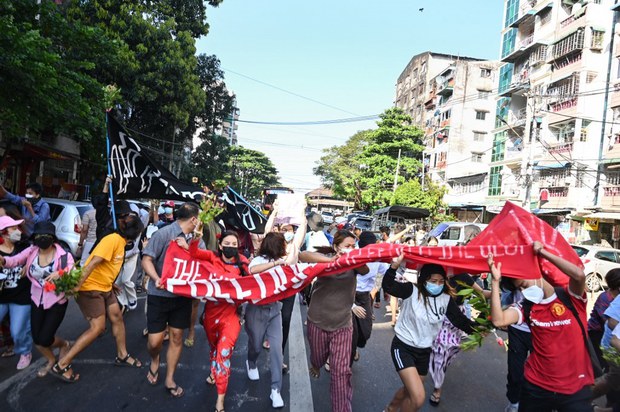 US, UN condemn the assault, which witnesses said happened immediately after the crowd had formed.

At least five people were killed and dozens injured in Myanmar on Sunday when a military truck slammed from behind into a group of peaceful protesters and soldiers emerged from the vehicle to attack others in the crowd, according to witnesses and media reports.

The flash-mob demonstration against the Feb. 1 military coup that overthrew civilian rule in Myanmar was attacked only minutes after it began, and was followed by another protest in the city later in the day, media reports said.

Eleven protesters, including some of those injured in the attack, were also arrested, state television said.

The U.S. Embassy in Myanmar also denounced the military’s attack on unarmed civilians on Sunday, saying it was “horrified” by reports of the violence.

“We support the right of the people of Burma to protest peacefully,” the embassy said, referring to Myanmar by its colonial-era name. “The military’s widespread use of brutal violence underscores the urgency of restoring Burma’s path to inclusive democracy.”

“We stand with the people of Burma in their aspirations for freedom and democracy and call on the military regime to end the use of violence, release those unjustly detained, and respect the will of the people,” the embassy said.

Also in a statement, the United Nations on Monday demanded Myanmar’s military rulers take action against those involved in the ramming attack, with Ramanathan Balakrishnan — the U.N. resident coordinator in Myanmar — calling for “those responsible for the use of excessive and disproportionate use of force against unarmed civilians” to be held to account.

Among those arrested by Myanmar security forces after Sunday’s attack were Myanmar Pressphoto Agency (MPA) TV correspondent Hmu Yadanar Khet Moemoe Tun and photojournalist Kaung Set Lin. Both are now being treated for their injuries at a military hospital and have been denied contact with lawyers and family members, MPA founder Jay Paing told RFA on Monday.

“Kaung Set was injured below the waist and sustained other injuries when the vehicle hit him,” Jay Paing said. “We have learned that he is not seriously wounded, but Hmu Yadanar is in critical condition, and her family and lawyers have not seen her yet.”

Mya Kyu Kyu Thin, 20, a Red Cross nurse and student at the Insein Government Technical Institute, was also among those taken into custody, with a spokesman for the GTI Student Union telling RFA the young woman’s family has had no word of her whereabouts or condition.

“And we dare not contact her family for reasons of security. We don’t even know if she was injured or not,” the spokesman said, calling the military’s attack against the student and her fellow protesters a “brutal and inhuman act.”

Junta spokesman Major Gen. Zaw Min Tun in a statement Sunday said no one had ordered soldiers to drive their vehicle into the protesters and that no one had been killed, with military forces taking only “precautionary measures” against the crowd.

“No, no one was killed, and the injured were taken to hospital right away,” the spokesman for Myanmar’s ruling “State Administration Council” said.

“No one gave any such order. That should be obvious,” he said. “I think the security forces made decisions to prevent a dangerous situation based on their experience and the situation they were in.”

Some of the protesters who escaped the morning crackdown returned later in the day to place flowers at a spot where shoes, slippers, umbrellas and bloodstained clothes had been left behind by those who were killed, injured or arrested, sources said.

A witness to the violence in Yangon’s Kyimyindine township said she she had seen at least three injured girls left behind after the attack.

“Two of them were very scared and were holding each other, but we couldn’t do anything to help them,” the witness said, speaking on condition of anonymity for security reasons.

“A boy in a black shirt was lying on the ground, and beside him was a boy in a white shirt lying totally motionless. When we later heard the junta denying this had happened, we wanted to testify against them as eyewitnesses,” she said.

“So many people saw this happen. I was so shocked and furious that I couldn’t focus on anything else the entire day.”

Residents of several Yangon townships banged pots and pans late Sunday to protest the army’s attack. Protests also broke out in Shwebo township in northwestern Myanmar’s Sagaing region, in Mandalay city, and in other townships including Launglon in Tanintharyi region along Myanmar’s southern coast.

The junta has yet to provide evidence for its claims and has violently suppressed nationwide protests calling for a return to civilian rule, killing 1,303 people and arresting 7,796 over the last 10 months, according to the Bangkok-based Assistance Association for Political Prisoners (AAPP-Burma).