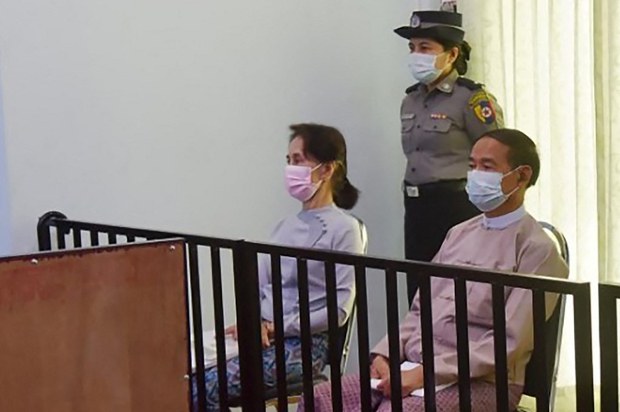 A military court sentenced deposed Myanmar leader Aung San Suu Kyi to four years in prison Monday over incitement and breaches of COVID-19 laws, which the junta chief reduced to two years of house arrest, in a ruling condemned by the U.S. that rights groups said was aimed at ending the Nobel laureate’s political career.

Ten months after they were overthrown and arrested by the army, the 76-year-old Aung San Suu Kyi and President Win Myint received two years for incitement against the military and two years for violating coronavirus restrictions, according to sources familiar with the closed-door court proceedings.

A broadcast on military-run television Monday cited junta chief Min Aung Hlaing’s discretionary power to amend criminal sentences as “President of the Union”–a status that is not recognized outside military circles–to reduce the sentence of the two leaders to two years under house arrest.

“The Burmese military regime’s unjust conviction of Aung San Suu Kyi and the repression of other democratically elected officials are yet further affronts to democracy and justice in Burma,” U.S. Secretary of State Antony Blinken said in a statement, using the country’s former name.

“We join the people of Burma in their aspirations for freedom and democracy and call on the regime to end the use of violence, respect the will of the people, and restore Burma’s democratic transition.”

The details of verdicts, which also included a two-year sentence for incitement for Naypyidaw Mayor Myo Aung, remained undisclosed. All five of the former State Counselor’s lawyers have been barred since October by Myanmar’s military rulers from releasing information or speaking publicly about the two cases being tried.

“It’s no surprise the Myanmar military junta is hauling Aung San Suu Kyi and her co-defendants off to prison on these bogus charges,” said Phil Robertson, deputy Asia director at Human Rights Watch.

“This trial was one hundred percent political from day one, and was done with clear intent to lock her away for good so she can never again contest military rule,” he said in a statement from Bangkok.

The incitement charges under Section 505 (b) of the Penal Code, stem from speeches by Aung San Suu Kyi, Min Myint, and Myo Aung denouncing the Feb. 1 military takeover.

“The harsh sentences handed down to Aung San Suu Kyi on these bogus charges are the latest example of the military’s determination to eliminate all opposition and suffocate freedoms in Myanmar,” said Ming Yu Hah, Amnesty International’s deputy regional director for campaigns.

The sentences on Monday cover just two of as many as 13 different charges against Aung San Suu Kyi, including corruption and incitement, that could carry a maximum sentence of more than 100 years in prison.

“This is just the beginning of the rights abusing landslide of even more severe criminal charges that will most likely ensure that Suu Kyi is never allowed to be a free woman again,” said Robertson.

Myanmar’s junta has also detained nearly four dozen high-ranking officials from the ousted National League for Democracy (NLD) on charges of corruption since seizing power ten months ago in what legal analysts have called a bid to tarnish the party’s image after its landslide November 2020 election victory.

The junta has yet to provide evidence of its claims and has violently suppressed nationwide protests calling for a return to civilian rule, killing 1,303 people and arresting nearly 7,800 over the last nine months, according to the Bangkok-based Assistance Association for Political Prisoners.

“This ridiculous ruling is a travesty of justice,” said Malaysian lawmaker Charles Santiago, a member of ASEAN Parliamentarians for Human Rights, who called the arrests ”nothing more than an excuse by the junta to justify their illegal power grab.”

“Despite this most recent attempt to demonstrate their power, the Myanmar people continue to risk their lives every day to show that they completely reject this military,” he said in a statement.

Other observers in Myanmar told RFA that they never expected justice in Aung San Suu Kyi’s case due to the influence of the junta.

A woman in Naypyidaw said on condition of anonymity that she was more concerned over the NLD leader’s health.

“The main thing is to hope that ‘Mother Suu’ is healthy, because even if this case is over, she can still be imprisoned for later offenses,” she said. “Mother Suu is now over 70 years old. It should not be the case that she is placed under house arrest and preparing for long-term imprisonment.”

Aung Kyi Nyunt, a central committee executive member of the NLD, suggested that the junta had “determined the outcome of the prosecution from the beginning with the intention of imprisoning her and never releasing her.”

Bo Bo Oo, an NLD member, criticized the court’s ruling as a form of intimidation that was meant to warn the people of Myanmar against opposing the junta.

“This four-year sentence is just one of the latest sufferings of our people in Myanmar,” he said.

“The sentence illustrates that [junta chief Min Aung Hlaing] has an inferiority complex and is afraid of the NLD, afraid of Daw Aung San Suu Kyi and President Win Myint, and afraid of the truth and the people. There is nothing good about the junta which is overwhelmed by greed, anger and delusion.”