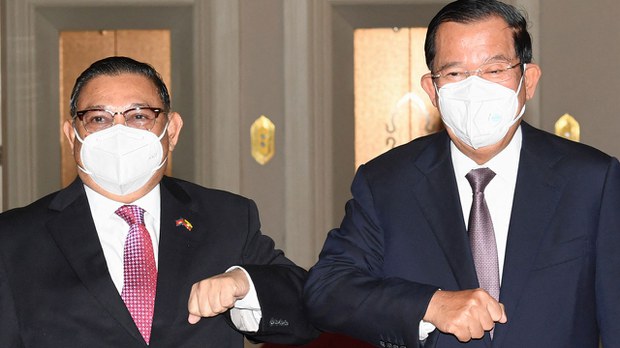 Observers say the bloc’s authority is at risk if Cambodia does not stand firm on its Myanmar policy.

Cambodian Prime Minister Hun Sen,  the incoming Association of Southeast Asian Nations (ASEAN) chair, unveiled a visit to army-run Myanmar early in 2022 after meeting with the junta’s foreign minister Tuesday, as observers warned that failure to hold the military regime to account for its repressive rule could undermine the bloc’s authority.

Hun Sen is planning to visit Myanmar’s capital Naypyidaw from Jan. 7-8 to meet with junta chief Min Aung Hlaing, according to a statement by Hun Sen’s spokesman Eang Sophalleth issued after Wunna Maung Lwin, the junta’s foreign minister, met with Cambodian strongman at the Peace Palace in Phnom Penh to discuss the resumption of relations between ASEAN and his country.

Myanmar is one of ASEAN’s10 member states, but has been at odds with the bloc since its military seized power in a Feb. 1 coup.

However, a senior official at Myanmar’s Ministry of Foreign Affairs, who spoke on condition of anonymity, said the junta “expects to return to the ASEAN summit” and suggested that it might be more amenable to allowing a special envoy from the bloc into the country if it is one appointed by Cambodia.

Since February, security forces in Myanmar have killed more than 1,300 civilians and arrested nearly 7,800 more, mostly in crackdowns on nonviolent anti-junta protests. ASEAN, usually reluctant to interfere in the internal affairs of its member states, has repeatedly called on Min Aung Hlaing to put an end to the violence and allow a diplomat from the bloc into his country to help broker dialogue between the military regime and the deposed National League for Democracy (NLD).

Late last month, Myanmar was absent from the two-day Asia-Europe Meeting (ASEM) that included leaders from some 50 Asian and European countries, marking the third time the ASEAN had sidelined Min Aung Hlaing over the violence and repression in the wake of the coup. Myanmar was also excluded from the ASEAN Summit and a meeting between China and the bloc over the past two months.

Hun Sen was recently handed the ceremonial gavel by representatives of current ASEAN chair Brunei ahead of Cambodia assuming bloc leadership on Jan. 1 and, as the head of a government that is regularly accused of gross human rights violations, observers have expressed concern that Myanmar’s junta will not be held to account under his watch.

Unity and credibility at risk

News of Tuesday’s planned meeting was met with frustration in a statement earlier in the week by Kasit Piromya, a board member of the ASEAN Parliamentarians for Human Rights (APHR) and a former Thai member of parliament, who said Hun Sen risked “wasting ASEAN’s hard-won diplomatic progress” since the coup took place.

“As the new Chair of ASEAN, it is in the Cambodian government’s interests to strengthen its own, and ASEAN’s, credibility by remaining fully committed to the Five-Point Consensus, by providing a roadmap on how it plans to progress the agreed action points, including appointing a new Special Envoy,” the statement said, referring to a plan Min Aung Hlaing agreed to during an ASEAN meeting in April, but has failed to implement.

Kasit Piromya said Hun Sen should not be discussing plans to visit Myanmar, which he said would provide legitimacy to the junta, before concrete steps are taken to end the country’s political crisis.

“This was the very reason ASEAN excluded junta leader Min Aung Hlaing from its Summit in October,” he said.

Kasit Piromya warned that ASEAN’s unity and credibility are at risk if Hun Sen does not follow through with the bloc’s agreement on Myanmar and urged the leader to stand firm.

After Myanmar was not invited to its third ASEAN meeting last month, Hun Sen said that the bloc had not barred it from attending and that “only Myanmar gave up its right” to join.

However, on Monday, the Cambodian Prime Minister told local media that Myanmar should be permitted to attend all ASEAN summits and that “no member of the bloc has the right to impose sanctions on any other.”

Political observers told RFA’s Myanmar Service that the change in tone could signal pressure from Beijing, which supported Hun Sen’s government after it was ostracized by the West for winning elections widely seen as neither free nor fair and has also backed the junta amid international sanctions over its violent repression of protests.

Hla Kyaw Zaw, a Sino-Myanmar expert living in China, said Cambodia has no intention of shaking off Chinese influence.

“Since China has given support to Hun Sen since he came to power, Hun Sen will continue to follow China’s lead,” she said.

Hla Kyaw Zaw noted that the Regional Comprehensive Economic Partnership (RCEP) – a trade deal signed by all ASEAN members, as well as China, Japan, South Korea, Australia, and New Zealand – will come into effect on Jan. 1 and that the underlying supply chain will only be successful if all the bloc’s members participate.

“Maybe that’s why they are trying to get Myanmar back into the fold,” she said, adding that China likely wants to ensure Naypyidaw is involved from the get-go to ensure the project runs smoothly.

Soeung Sengkaruna, spokesman for the Cambodia-based rights group ADHOC, told RFA’s Khmer Service that if Hun Sen’s government failed to set the stage on ASEAN-Myanmar relations by including a discussion on human rights and democracy with Wunna Maung Lwin’s delegation during Tuesday’s meeting, it will impact Cambodia’s authority as chair in 2022.

“[Cambodia and Myanmar] claim to be democratic countries, but they’ve failed to implement those principles, as both face criticism over political arrests and restrictions,” he said.