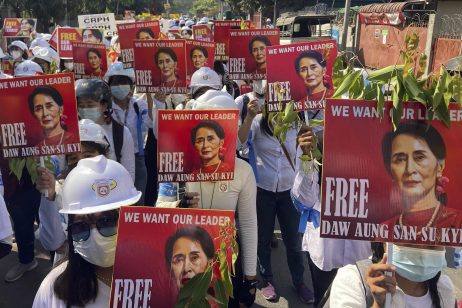 Aung San Suu Kyi inspired a generation of young people who are keeping the dream of freedom alive in Myanmar.

In the latest blow to democracy in Myanmar, the country’s last elected leader, Nobel Peace Prize laureate Aung San Suu Kyi, was formally sentenced to prison this week – just 10 months after being deposed in a military coup d’état.

With this action, the military is extending its authoritarian influence over the people of Myanmar in an attempt to control and silence them. While Aung San Suu Kyi was a polarizing figure in democracy circles before the coup, she is the best chance Myanmar has of a return to democracy because she has inspired a generation of young people who are keeping the dream of freedom alive.

As the global champion for democracy, the United States must continue to advocate for Myanmar, which needs international support now more than ever. The Biden administration and Congress must ramp up pressure against the military government and press for Aung San Suu Kyi’s release and the removal of the charges against her. Washington should demand that the military regime peacefully transfer power to the National League for Democracy, which won another landslide victory in Myanmar’s 2020 elections before the coup.

As Myanmar’s leading democracy figure, Aung San Suu Kyi had been detained by the military since February 1, but this week’s verdict was the first against her since the coup. She was initially sentenced to four years in prison, but that was halved to two later in the day.

Aung San Suu Kyi wasn’t a perfect leader during her five years at the helm of state: Consider the egregious human rights atrocities against the Rohingya population, led by the military regime but allowed to occur by her government. But she truly sparked and inspired a generation of young pro-democracy leaders who deeply and passionately long for a better Myanmar.

At the George W. Bush Institute, we have been privileged to work with nearly 80 diverse leaders from Myanmar over the past seven years as part of our Liberty and Leadership program.

We have heard repeatedly that Aung San Suu Kyi was a role model to these young democratic activists, much as she influenced older generations. She spent 15 years in prison over the course of 21 years, but still built a unified community of democracy champions that led Myanmar to its first democratic elections in 2015.

The elections in 2015 and 2020 – which brought Aung San Suu Kyi and her party, the NLD, to power in Myanmar’s first civilian government – sparked hopes and dreams of a brighter future for Myanmar, which have sadly been challenged by the military takeover.

But the gains Myanmar made over the past decade may be the main reason that the oppressive military regime hasn’t succeeded in gaining complete control of the country.

Thousands of anti-coup protestors have been arrested since February, and a number have been killed. Free speech and media have been effectively silenced, and over 120 journalists have been arrested. Just this week, on December 5, at least five people in the country’s largest city, Yangon, were killed for protesting the junta’s actions. Atrocities against the Rohingya continue.

However, as we’ve seen since February 1, these tragedies will not stop these young activists from continuing to stand up for democracy and a peaceful return of power.

So Aung San Suu Kyi should matter to us, because she gives these activists hope.

Democratic nations must continue to keep Myanmar at the forefront of foreign affairs. Civil society organizations should continue to meet with and feature young Myanmar activists. These young people are true heroes for democracy today, and we should take the time to listen to them.

Myanmar’s democratic transition has been progressive, albeit not perfect, over the past decade. Today, the country’s future remains uncertain.

But Aung San Suu Kyi’s vision of a democratic Myanmar still guides and inspires the hearts of the peaceful protestors on the streets today. I am confident that Myanmar’s youth can come out of this period of strife more compassionate and ready for democracy than ever before.

They will continue to stand strong for democracy, but they can’t do it alone. They need our help. So we must not forget about Myanmar or Aung San Suu Kyi.