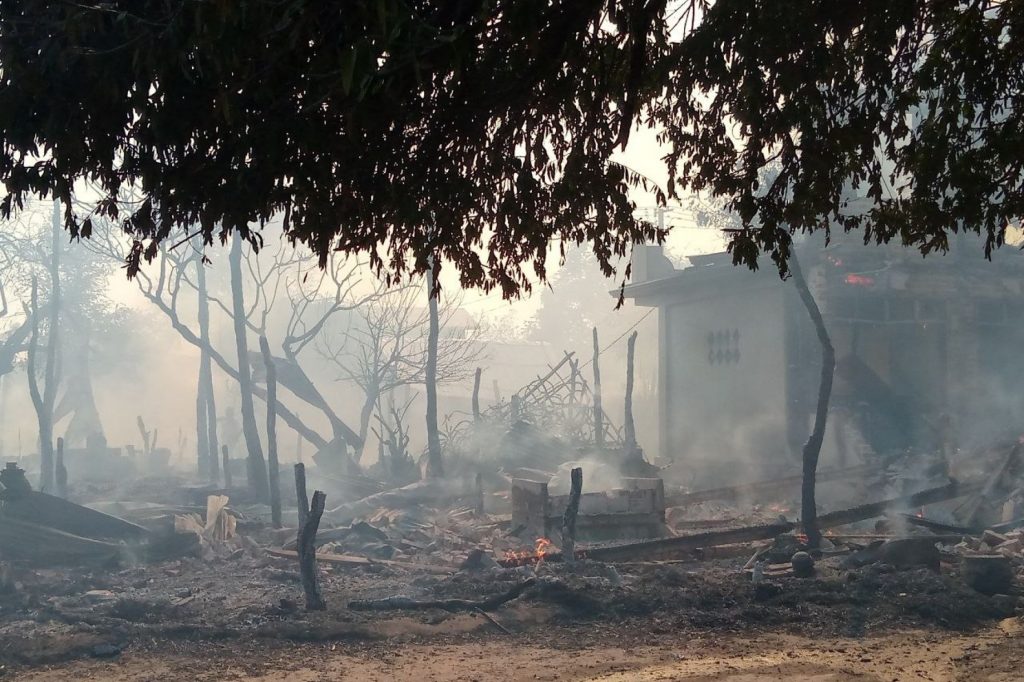 A man abducted by the military has opened up about witnessing the junta troops’ brutal artillery and arson attack on Ke Bar village in Sagaing Region’s Ayadaw Township on Monday.

The Myanmar army fired shells at and then raided Ke Bar beginning at 9am on Monday, burning some 100 homes, local sources previously told Myanmar Now.

That morning, 40-year-old Maung Myint and his sister, Win Khin, were returning to the village after gathering plants to feed to their cattle. They were captured by the military some time before the raid began, Maung Myint said in video footage filmed by villagers after his release and seen by Myanmar Now.

In the five-minute testimony, Maung Myint described how soldiers fired shells at Ke Bar from mango farms north of the village before some 150 armed troops including members of the pro-military Pyu Saw Htee network entered the community.

He said that both soldiers and Pyu Saw Htee members questioned him about the presence of members of the anti-junta People’s Defence Force (PDF) in Ke Bar.

“They said that they weren’t here to kill us but to burn our village,” he said. “They asked me how many PDF members were in our village and I told them that I didn’t know as I live in the forest. They weren’t happy with my answer, and I thought they were going to knee me, but they only did so very lightly. Then both my sister and I were handcuffed.”

Maung Myint explained that the troops had promised him and his sister that they would not harm them if they were cooperative, but threatened them both with a knife when they admitted that they did not know where the PDF’s bases in the area were located.

“They threatened to kill us because we kept saying that we didn’t know anything,” he said in the video footage. “I told them to kill us right then and there if they wanted to. One soldier who was big and pale said that they would not lay a finger on us.”

“They kept trying to scare us but I was calm and collected since I was praying to the Buddha,” Maung Myint continued.

The military personnel who raided the village were reportedly uniformed and carrying guns, explosive devices and around seven RPG launchers.

“They used RPGs on our village first and then started shooting guns,” Maung Myint said. “They told me to duck behind a mango tree so that I wouldn’t be hit by the bullets shot back by the resistance fighters. They were taking cover behind mango trees as well. They kept reminding me that I would die if I didn’t stay down.”

Maung Myint did not elaborate on the military’s actions once they arrived in Ke Bar, but local sources previously told Myanmar Now that the soldiers and Pyu Saw Htee members systematically set fire to the homes in the village, also reportedly destroying motorbikes and a school.

Myanmar Now has been unable to speak with either Maung Myint or Win Khin, as they are in hiding, unable to return to Ke Bar.

Multiple sources describe a junta attack on the village of Ke Bar involving artillery fire, the systematic burning of houses and the abduction of two local men

According to Moe Gyo, who leads a locally organised chapter of the PDF in Ke Bar, the two hostages were handcuffed and held as human shields, but released at around 3pm on Monday after the military left the village.

“They took the siblings so that the PDF wouldn’t be able to use explosives [in their fight against the army],” he said.

Some villagers had come back to Ke Bar and begun sifting through the remnants of the burnt houses on Tuesday, but many remained in hiding, fearful of returning and potentially encountering Myanmar army troops.

“The people from the houses that were not torched are packing up and moving. They even brought as many crops as they could with them to other villages, since we don’t know when the military will come back,” Moe Gyo said.

Almost half of the village’s homes in the old section of Ke Bar are now believed to have been destroyed in the fire set by the military, according to the PDF.

The military council has not released any information regarding the incident.