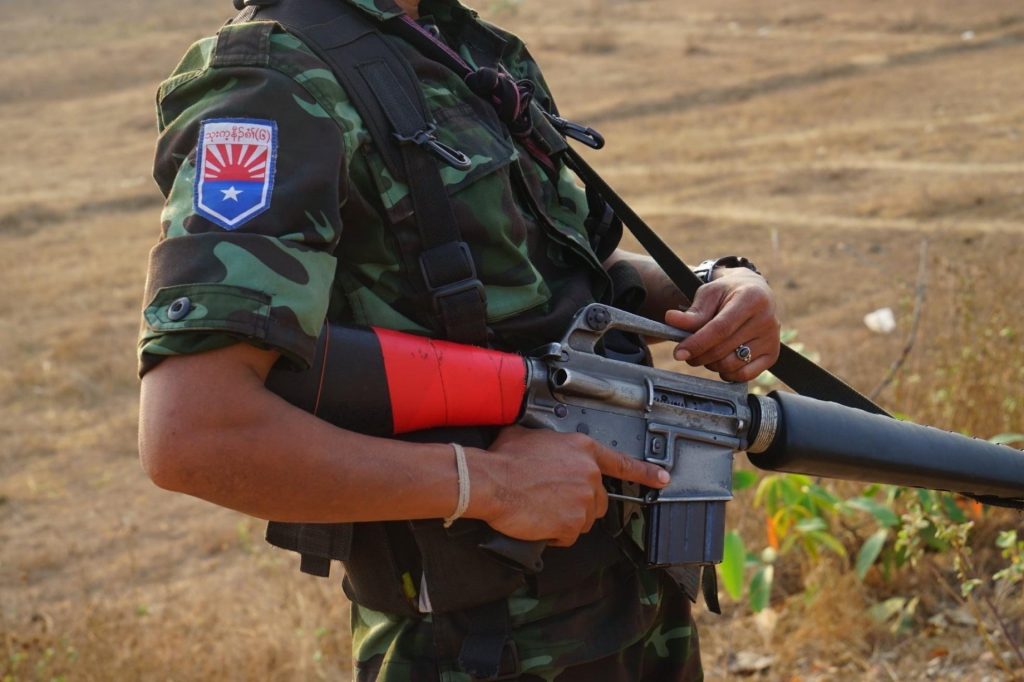 A second day of fighting triggered by military raids on Lay Kay Kaw kills five junta soldiers and forces thousands of locals to flee, some into Thailand

Clashes between junta troops and the Karen National Liberation Army (KNLA) continued on Thursday near Lay Kay Kaw, forcing at least 3,000 residents from the Karen State town and the surrounding villages to flee the area.

Fighting resumed on Thursday morning around the nearby village of Mae Htaw Tha Lay, where gunfire and shelling were reported until the afternoon, according to local sources.

A resident who fled the clash told Myanmar Now that the KNLA ambushed regime troops near the village of Bei Hee Ka Law, located between Lay Kay Kaw and Mae Htaw Tha Lay.

A member of the People’s Defence Force (PDF) who fought alongside the KNLA troops said that both sides suffered casualties during Thursday’s clashes.

“The military fired both light and heavy weapons near Mae Htaw Tha Lay and Bei Hee Ka Law. Both sides have casualties,” said the PDF member, who spoke to Myanmar Now on condition of anonymity for security reasons.

Another PDF member said the clashes continued until 4pm and that junta forces stationed at a monastery and a school in Bei Hee Ka Law had opened fire on Lay Kay Kaw with heavy artillery.

A joint force of KNLA and PDF fighters clashed with junta forces at the school and at least four junta soldiers were killed, he added.

“The KNLA said we could open fire once [the junta forces] advanced towards Lay Kay Kaw,” he said.

The Karen National Union (KNU) administration in Dooplaya District—territory of its armed wing, the KNLA’s, Brigade 6—said in a statement on Friday that five junta soldiers, including a medic, were killed during Thursday’s clashes. The KNLA suffered no casualties, it added.

It also said that the soldiers were troops from the military’s Light Infantry Battalion 560 under the control of the 13th Military Operations Command.

A full day of fighting

The KNU said in a statement released late Thursday that junta troops and reinforcements from a military-backed Border Guard Force advanced on Lay Kay Kaw and clashed with KNLA forces almost the whole day on Thursday.

The clashes, which forced almost all of Lay Kay Kaw’s residents to flee, come more than six years after the KNU signed the Nationwide Ceasefire Agreement with the military in 2015.

The KNLA will reportedly inspect Lay Kay Kaw, which is now virtually empty, for any remaining Myanmar military presence.

Myanmar Now was unable to reach the spokesperson for the KNLA’s Brigade 6, which controls the area around Lay Kay Kaw, for comment on Thursday’s clashes.

Fighting initially broke out on Wednesday morning after a military raid on the town the day before, during which junta soldiers arrested some 30 people, including an MP from the ousted National League for Democracy (NLD) government.

Around 200 soldiers searched Lay Kay Kaw Myothit, which is under the control of KNU Brigade 6, early Tuesday morning

Established in 2015 for the repatriation of Karen refugees from Thailand as part of Myanmar’s now defunct peace process, Lay Kay Kaw has received many regime opponents in recent months.

The junta’s raids on the town appeared to be aimed at rounding up some of those who have fled to KNU-controlled territory since the coup in February, including striking civil servants, PDF members, and others opposed to military rule.

Myanmar Now was unable to confirm the exact number of arrests that have been made in the town, as most residents were still fleeing on Thursday.

The clash in Lay Kay Kaw comes after soldiers detained several people, including a deposed NLD lawmaker, during a raid on the town

The KNU’s Dooplaya District administration said on Friday that 20 striking workers who were staying at Lay Kay Kaw were arrested during the junta raids on Tuesday and Wednesday.

The KNU said in its statement that they had learned of the planned raid in advance and had warned those taking refuge in Lay Kay Kaw to temporarily leave the area.

“While some did flee in advance, some did not,” the KNU said.

“Even though the KNLA forces were prepared to fight, there would have been civilian casualties if our forces opened fire. So our forces didn’t do so [during the raid on Tuesday],” said the KNU statement.

Lay Kay Kaw, located around 14km south of the town of Myawaddy near the Thai-Myanmar border, has a total of six residential wards housing around 2,000 people. Some residential wards are located in the hills to the west of the town. The KNU is responsible for the town’s security and administration.

An anti-junta activist who has been living in Lay Kay Kaw for the past five months said the military has carried out a number of searches in the town. He said that Tuesday’s raid was the sixth since he arrived there.

“Those who are not locals here hid elsewhere during previous searches, since we were always informed in advance that they would be coming. There were no arrests in the past,” he said.

He added that residents had been warned on Monday that regime forces were coming, but some were unable to escape in time because of the overwhelming number of troops that arrived the following day.

“They sent in four different columns at once, so it was difficult to run,” he said.

Unlike previous raids, the one on Tuesday resulted in clashes because it was carried out “by force,” the KNU said.

The group said that the fighting on Wednesday started after regime troops returned and attempted to make more arrests. They also ransacked people’s houses, prompting the KNLA forces to respond, it added.

After the KNLA fired on and surrounded the junta troops, the fighting died down for several hours before resuming later in the day.

According to the KNU, the two sides started fighting again because the regime soldiers remained in Lay Kay Kaw even after requesting and receiving permission from the KNU’s town administrators to leave.

“The administrators told them they could go, but when they failed to do so, that started another clash at around 5pm,” the organisation said.

The fighting on Wednesday evening involved around 200 soldiers who attempted to occupy the hills near Lay Kay Kaw’s ward 6, while other regime troops outside the area fired heavy weapons at the hills where KNLA soldiers were stationed.

The clashes intensified at around 7pm and continued for about two hours, residents reported. They added that the military fired both light and heavy weapons into Lay Kay Kaw.

During Wednesday’s clashes, four junta troops, including three officers—a captain, a sergeant, and a corporal—were killed. A lieutenant colonel believed to be the battalion commander, a captain, and two privates were injured, according to the KNU’s statements.

Battalion commander Htet Lin Zaw was injured in the leg and he was the one who led junta troops in the raid on Tuesday, according to the KNU’s Dooplaya District administration.

A video of KNLA troops checking on a junta soldier believed to have been shot has been circulating widely on social media since it was posted on an anti-junta social media account on Thursday. In other videos posted online, gunfire can be heard.

The KNU said it had allowed some NLD lawmakers and striking civil servants to stay in Lay Kay Kaw on humanitarian grounds.

“The actions of the military council’s forces, such as entering Lay Kay Kaw and assaulting its inhabitants, are destroying the peace and violating human rights,” it said.

The KNU said the clashes and military assaults forced some 4,000 people from Lay Kay Kaw and several nearby villages to flee, including some who crossed the border into Thailand.

The Karen Information Center, a local media group, reported that the number of displaced was between 3,000 and 4,000. It said that residents of at least seven villages located south of Myawaddy, including Mae Htaw Tha Lay, Bei Hee Ka Law, Hpa Lu Gyi and Hpa Lu Lay, had fled to safer places in the surrounding area or across the border.

According to one displaced villager who entered Thailand, around 200 people crossed the Moei River, which lies between the two countries.

“The military forces arrived at our place once the clashes started. We saw six of them on the road, but they didn’t bother us because we were all carrying baggage,” the man said.

“We then crossed the river. After us, I don’t think the soldiers allowed anyone else to go across,” he added.

According to the man, junta troops fired several shots when a large number of people started crossing the river. He said that Thai soldiers responded to this by firing their guns.

After arriving in Thailand, local authorities provided the displaced villagers with lunch and arranged for them to stay at a nearby cattle farm, the man added.

Two people who crossed the river told Myanmar Now that an artillery shell, believed to have been fired by regime forces, exploded on the Thai side of the border near where displaced people were sheltering.