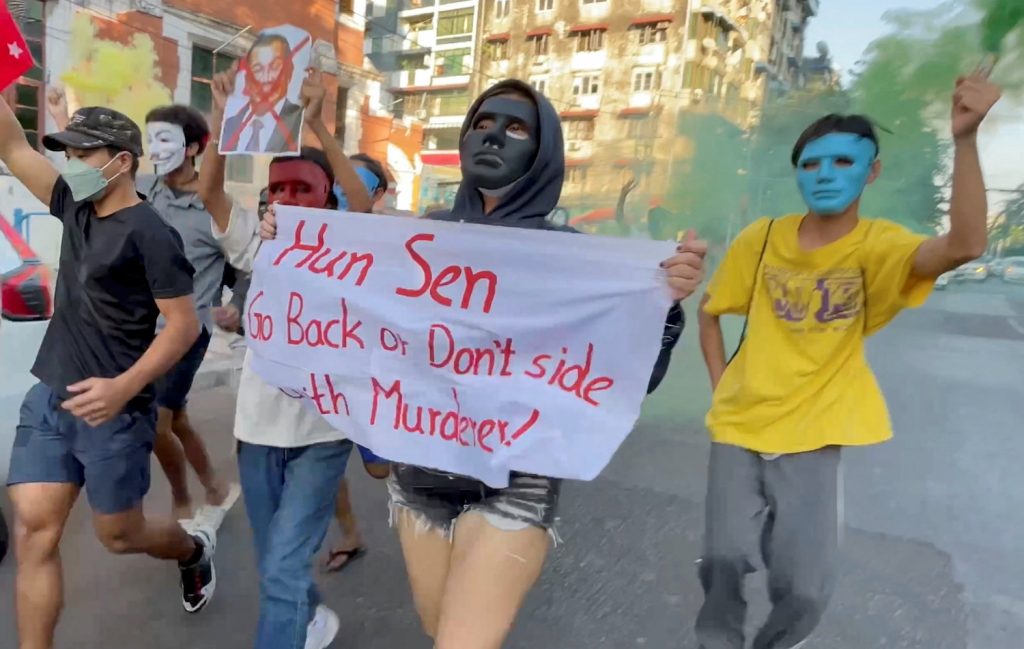 The head of Myanmar’s military junta has reportedly said he will assure an Asean special envoy that he can meet with all parties involved in the country’s political turmoil, including armed ethnic minority groups.

The declaration was contained in a joint statement issued after a meeting between Senior Gen Min Aung Hlaing and Cambodian Prime Minister Hun Sen in the capital Nay Pyi Taw on Friday.

The statement did not specify whether the envoy could also meet with opposition figures or with Aung San Suu Kyi, the deposed former state counsellor now facing numerous criminal charges pressed by the junta. The military had rejected previous requests from Asean for such contacts.

Hun Sen is the first foreign leader to visit Myanmar since the military seized power in February last year. Cambodia is chairing Asean this year, and Hun Sen has said he wanted to revive diplomatic efforts to resolve the crisis in Myanmar.

At least 1,300 civilians have been killed by the military and thousands more jailed in the past 11 months by a regime that appears in no hurry to loosen its grip on power.

Min Aung Hlaing reportedly pledged support for the so-called five-point consensus reached at a special Asean summit that he attended last April in Jakarta. It included a call for an immediate end to violence in Myanmar along with a plan to appoint a special envoy named by the 10-country bloc.

The first envoy named by Asean, Bruneian diplomat Erywan Yusof, was repeatedly rebuffed by the junta when he asked to meet with opposition figures including Aung San Suu Kyi. Hun Sen has proposed his country’s foreign minister, Prak Sokhonn, as the next special envoy to the troubled country.

Asean leaders in October barred Min Aung Hlaing from their annual summit, expressing dissatisfaction that he had essentially ignored the consensus.

Hun Sen on Friday stressed his support for efforts by Myanmar’s military leadership to seek a solution, saying complete peace and national reconciliation cannot be achieved without participation and agreement from all parties involved. He cited the lessons learned from the Cambodian peace process that took place from the late 1980s to the early 1990s.

That process resulted in the formation of a democratically elected government in Cambodia, but Hun Sen has spent the intervening years consolidating his power through legal and other means. By 2018, most opposition figures were either in jail or exile, and his party won all the seats in the election held that year.

Opponents of the military junta have protested against Hun Sen’s visit to Myanmar, claiming he is legitimising the military government by meeting only the commander of the armed forces.

The Cambodian leader arrived at an airport in Nay Pyi Taw on Friday morning and was greeted by the junta-appointed foreign minister, Wunna Maung Lwin, according to a military spokesperson.

Aung San Suu Kyi, who has led the country’s pro-democracy camp, remains under house arrest and faces years on prison over charges that her supporters believe are politically motivated.

Ousted from power in the coup, the pro-democracy camp has been engaging in guerrilla warfare against the military in concert with some armed ethnic minority groups, further deepening turmoil in the country.

Prior to Hun Sen’s visit to Myanmar, pro-democracy forces staged rallies and burned photos of the Cambodian prime minister, according to local media reports. The protests followed explosions near Cambodia’s embassy in Yangon on Dec 31, which caused no damage or casualties.

Phil Robertson, deputy Asia director of Human Rights Watch, said Hun Sen’s decision as Asean chair to meet the military leader was an affront to the people of Myanmar who strongly opposed the visit.

“In one single, selfish move, Hun Sen showed he’s more interested in building his own legacy than listening to the Myanmar people who are demanding Asean leaders also meet with their leaders elected in Myanmar’s November 2020 election,” Robertson said in a statement.