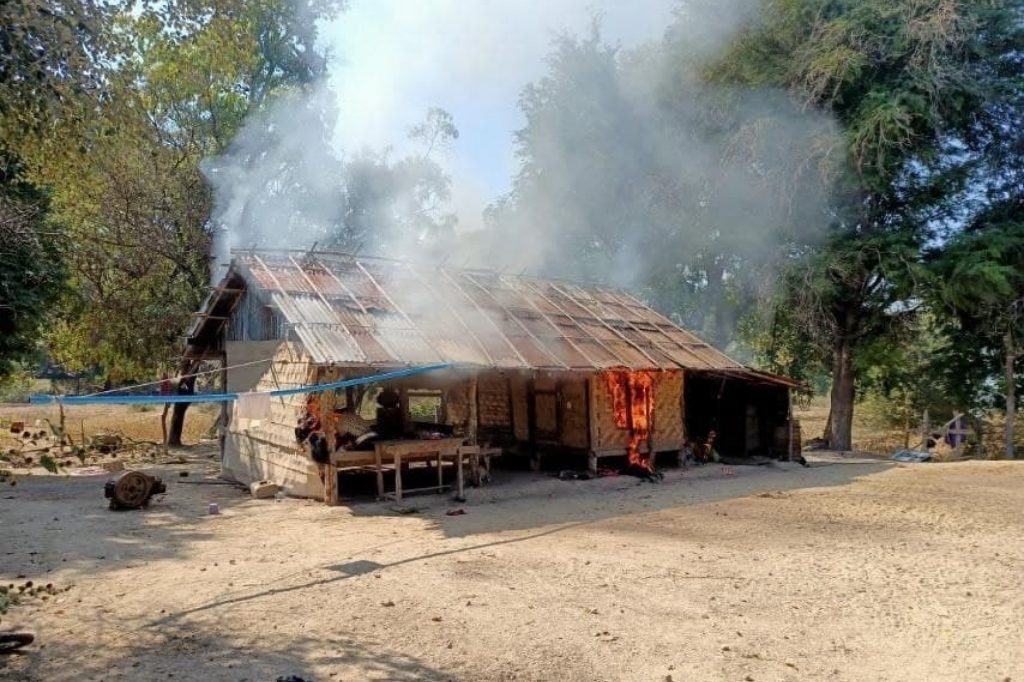 Around 130 junta soldiers arrived at a village in Sagaing Region on Sunday and abducted civilians in the area to use as human shields before raiding a People’s Defence Force (PDF) base, resistance fighters have said.

Some of the soldiers were dropped off by a helicopter near a monastery outside of Nyaungbingyitaw in Wetlet Township, a PDF spokesperson said, while others arrived by foot.

The troops then marched in two columns to the villages of Shar Kwe and Thit Saint and rounded up civilians before marching them through the forest and eventually raiding the base.

“I think they were trying to avoid mines,” said the spokesperson.

“Because they took civilians with them, we couldn’t attack them freely. We didn’t even manage to detonate the explosives we’d set up,” he added.

One had around 70 soldiers and another had around 50. They detained around 100 villagers between them, locals said.

A local Wetlet man said many villagers fled their homes to avoid being captured.

“They took every single person they saw,” he told Myanmar Now, “including those hiding in their houses and in the monastery.”

The soldiers made villagers sit in a line and showed them photos of PDF leaders and asked if they knew them, he added. “They’ve been terrorizing one village after another in Wetlet Township.”

The captives were set free in the evening of the same day. Those taken from Thit Saint were released unharmed but the villagers captured in Shar Kwe were beaten before their release, the local man said.

A junta spokesperson could not be reached for comment.

Before freeing the captives, the two columns of soldiers raided a base 26 miles from Nyaungbingyitaw where members of the Shwebo PDF were camped, but the resistance fighters fled before the soldiers arrived to avoid harming the captured civilians.

Ko Mhaing, a Shwebo PDF member, said the soldiers destroyed several buildings and some supplies at the base.

“The base was completely destroyed but the people are safe,” he said. “We also managed to relocate the weapons. However, we lost the furniture and appliances. Some food supplies were spared but they took the animals.”

Ko Mhaing said “hundreds” of soldiers attacked the base while a helicopter hovered above. He speculated that the military had intel about the location of the base ahead of time.

Sagaing is a stronghold of armed resistance forces fighting to overthrow the dictatorship. Junta forces have suffered heavy casualties there in the face of guerilla attacks from locals with handmade explosives and in-depth knowledge of the terrain.

The junta has assembled a pro-military militia-like force called Pyu Saw Htee to help in its effort to stamp out the resistance, though it officially denies involvement with the group.

On December 31 and January 1 PDF fighters attacked Pyu Saw Htee members and soldiers who were stationed in Phayarlaykone village, in the east of Wetlet Township, killing around 40 people.

The military launched an airstrike in response, enabling the remaining members of the junta’s forces to escape.

A day later, some 50 soldiers were dropped by two helicopters at the monastery outside of Nyaungbingyitaw while a third helicopter strafed the area with bullets and explosives.