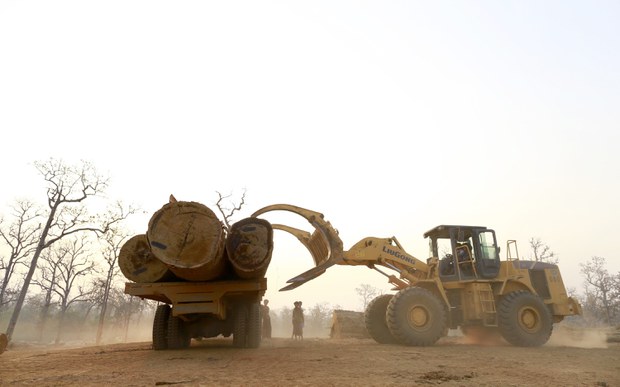 Justice for Myanmar believes more teak has been routed through third countries to disguise its origin. By Jack

Burmese teak, a tropical hardwood favored by luxury yacht builders, is continuing to find its way to U.S. timber yards despite sanctions that civil society groups say should make its import illegal.

In April last year, U.S. officials sanctioned Myanma Timber Enterprise, describing the state-owned company as a “key generator of government revenue” for the military, which had taken power in a coup two months earlier. MTE enjoys a legal monopoly over Myanmar’s timber trade, leading activists to conclude that any import of wood from the country would constitute a sanctions violation.

That view is shared by many in the European Union, which placed MTE under its own sanctions in June. The Irish government issued a notice the following month advising that as a result of the company’s designation, “All timber and timber products exported from Myanmar to the European Union will be regarded as illegal.”

However, an analysis of U.S. customs data has revealed that this is not the interpretation of many in the American hardwood industry, according to a report released by Justice for Myanmar on Tuesday. The NGO found that some 1,600 metric tonnes (1,763 tons) of Burmese teak had been imported from Myanmar by American companies between the start of the coup on Feb. 1 and Nov. 30.

MTE was not listed as the exporter on any of the customs records relied upon by Justice for Myanmar. The NGO nonetheless believes that the imports constitute sanctions violations, describing the listed suppliers as “intermediaries” between MTE and the American buyers, who they accuse of “evading sanctions by not buying directly from MTE.”

“This indirect trade between companies in the U.S. and MTE may not have attracted penalties from OFAC at this stage, but it still appears to contravene U.S. sanctions,” the report claimed.

OFAC, or the Office of Foreign Assets Control, is the part of the U.S. Treasury Department responsible for enforcing sanctions. In a statement released alongside the report, Justice for Myanmar spokesperson Yadanar Maung called on OFAC to investigate the NGO’s findings.

“Sanctions must be enforced in order to be effective. We urge OFAC to investigate U.S. imports of timber from Myanmar since sanctions were imposed on MTE,” Yadanar Maung said.

The Treasury Department did not respond to a request for comment.

In attempting to verify Justice for Myanmar’s findings, RFA found records of teak imports from Myanmar as recently as Dec. 28, when a single U.S. company received approximately 50 tonnes. That importer, East Teak Fine Hardwoods, is identified in Justice for Myanmar’s report as the largest post-coup importer of Myanmar timber, accounting for 49 percent of all Burmese teak imported to the U.S. between February and December of last year.

East Teak Fine Hardwoods president Wayne Rogers did not respond to an email seeking comment. But this is not the first time his company’s connections to Myanmar have come under the spotlight. It was named in a 2019 report by the London-based Environmental Investigation Agency detailing the exploits of a Chinese timber trader named Cheng Pui Chee.

Justice for Myanmar identified at least four other U.S. companies that had imported Burmese teak following the coup, with the largest volume by tonnage arriving late in 2021, several months after the imposition of sanctions. The NGO believes, however, that this is likely just the tip of an iceberg, with even more likely to have been routed through third countries to disguise its origin.