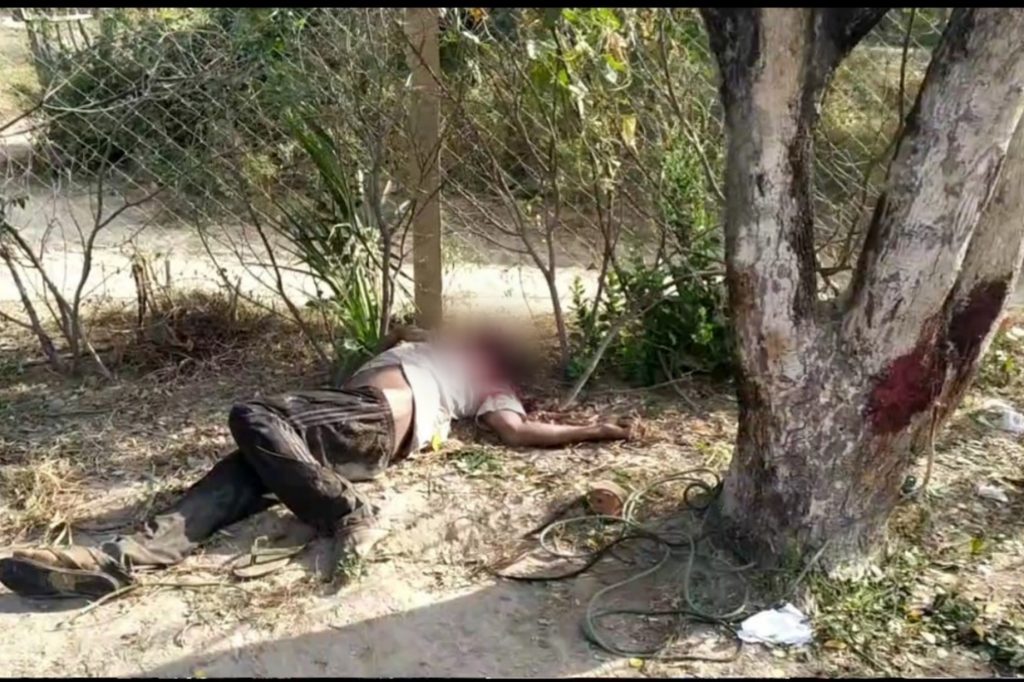 Some of the victims died on the spot after being shot by regime troops, while others showed signs of being torture to death

Junta troops have killed at least five civilians and two resistance fighters in three Sagaing Region townships so far this week, according to local sources.

On Monday, two unarmed civilians were shot dead near a bridge in Sagaing Region’s Htigyaing Township. They were travelling to the village of Kyarhnyat in Mandalay Region’s Thabeikkyin Township, some 70 km away from Htigyaing, a resident of the area told Myanmar Now.

The victims, both men in their late 30s, were killed near a military checkpoint where villagers are routinely harassed by soldiers, said the source, who did not want to be identified.

“It happened at around 8pm. They were heading back to the village on a motorcycle when the soldiers started shooting,” he said.

One man was killed instantly as he attempted to flee, but the other, who was shot first, managed to call his family before dying, he added.

“He told them to come pick him up, but that was all he was able to say,” said the villager, who is close to the victim’s family.

Earlier in the day, the bodies of two other men who were taken into custody at the same checkpoint late last week were found on the side of a nearby road.

The men, both aged 23, were members of a local resistance group called the Eagle Army, the group’s leader, Bo Chit, told Myanmar Now.

“The bodies were badly disfigured. One had been shot in the head, but the other was covered with bruises and didn’t have any bullet wounds,” he said.

There were also signs of extreme abuse on the bodies of two civilians who were killed during a military raid on Chanthar, a village in Ye-U Township, on Monday, local sources reported.

The raid, which was carried out by around 130 junta troops at around 10am, forced most of the village’s inhabitants to flee, but the two victims were among several people who were unable to escape in time, the sources said.

A villager who found the bodies of the two middle-aged men said that both had stab wounds to their chests, while one also had a crushed skull.

According to the source, three other local men were also tortured before the troops left on Tuesday.

The village remains empty, he added, as residents feared that the troops could open fire with heavy artillery again, as they did the day before.

This is the third time that Chanthar has come under attack since last April.

Late last month, at least seven civilians were killed after the military used five helicopters to carry out a raid on the nearby village of Yae Myet.

On Tuesday, another village came under attack in Kalay Township. At least one civilian was killed and three others were injured, local sources reported.

Thasi, a village on the Kalay-Gangaw road, was raided by more than 120 uniformed troops and others in plainclothes at around 7am, the sources said.

Most of the village’s roughly 1,000 inhabitants had fled ahead of the raid, but several people were still there when the regime forces arrived, they added.

According to a local woman who spoke to Myanmar Now at around 3:30pm on Tuesday, the village’s residents remain vulnerable to attacks by members of the pro-military Pyu Saw Htee militia who took part in the raid.

“We’ve had to flee again, because the Pyu Saw Htee started terrorising us even in the woods. Things are looking very bad here,” she said.

At least 20 civilians were found dead earlier this month following airstrikes on the village of Natchaung, which is also located on the Kalay-Gangaw road.

Myanmar’s junta has denied targeting civilians in its ongoing offensives against anti-regime groups operating in Sagaing Region and other parts of the country.

In a recent interview with the BBC, the regime’s spokesperson, Zaw Min Tun, blamed resistance forces for the high number of civilian casualties.

“There have been several occasions where they [resistance fighters] blended in with the civilians and ambushed the army. Our security forces have been trying to manage this situation,” he said.