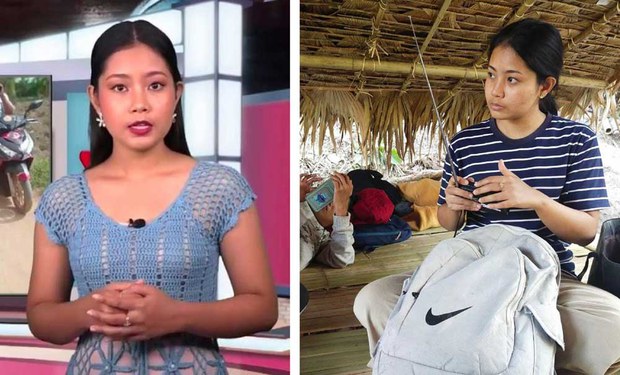 Htet Htet Eaindra Aung was a news anchor at 7-Day TV in Myanmar’s commercial capital Yangon when the military junta ousted the democratically elected government and shut down news organizations like hers. Now she’s among a group of young journalists trying to help to restore democracy by working remotely, often on the run, for online outlets dedicated to challenging the regime’s propaganda.

An outspoken critic of the military, Htet Htet Eaindra Aung said she felt that she had to flee Yangon after its crackdown on media. She spoke with RFA’s Myanmar Service from the jungle in Kayah state along Myanmar’s border with Thailand, with only a backpack full of her personal belongings.

“I can’t stand the weather here. It’s very cold,” she said. “There are days when you wake up in the morning without having a good night’s sleep. Sometimes I spend the whole night in front of the fire and go back to bed in the afternoon.”

Htet Htet Eaindra Aung spent several weeks on the run with refugees fleeing an offensive by the military in the Lay Kay Kaw region — an area in adjacent Kayin state under the control of the armed wing of the ethnic Karen National Union. Some 20,000 civilians are estimated to have fled fighting in the area to makeshift camps along the banks of the Thaung Yin (Moei) River and into neighboring Thailand.

Each day, Htet Htet Eaindra Aung records a news segment in front of a greenscreen for the online-only news outlets of PVTV and Delta News. At night, she sleeps in a crowded tent in the jungle. She said that she misses being able to work at her own pace and her former carefree lifestyle when “there was nothing to worry about.”

About 120 journalists have been detained since the coup, according to U.N. ad RFA tallies. While some have since been released, at least 53 others are still being held in various prisons. One photojournalist died while being interrogated and another was fatally shot in an artillery attack carried out by Myanmar’s armed forces while covering the plight of refugees in Kayin state.

The New York-based Committee to Protect Journalists said in a report it released in December that Myanmar ranks second only to China as the world’s worst jailor of journalists.

After the coup, Htet Htet Eaindra Aung said that she constantly felt anxious and insecure because she had spoken out against the military, making it impossible for her to work or even risk staying in her own home.

Eventually, she decided to leave Yangon to work as a correspondent in the jungle.

“I only have a brother and my father. They never stop me from doing what I want to do,” she said. “I told my father that I wanted to leave like this and that I might not be able to return home. He said it was fine and that I could decide for myself and not to worry about him.”

Htet Htet Eaindra Aung, who has a passion for singing and aspires to become an artist, said she was initially excited to experience life in the mountains and believed that working as a reporter in the country’s remote border regions would not be so difficult. However, she told RFA that she misses the convenience of city life in Yangon.

“I try to be happy here, with nothing in my mind. I carry out my work as required. But in my subconscious mind, I miss Yangon,” she said.

“I often have dreams and in them, I’d be walking alone in Yangon without anyone by my side. It should be a fun time in which I’m walking around the city happily. But I often feel very bad when I wake up from such dreams.”

Life in rural Myanmar isn’t only more difficult because of small inconveniences. When fighting between the military and the KNU intensified in Lay Kay Kaw, Htet Htet Eaindra Aung fled the town along with its residents, including infants and the elderly.

“I was very sad to see a newborn baby while on the run. The baby was only eight days old. Both the baby and the mother were running away from the fighting,” she said. “I saw elderly people as old as my grandmother trying to flee to safety. Even young people like me cannot stand the cold weather here. How can these elderly people manage?”

Htet Htet Eaindra Aung said she regularly prays for the release of the country’s detained journalists and the resumption of her career as a reporter following an end to military rule. She also expressed her appreciation for her family, who she said “have full confidence in me.”

“I’m so very grateful to my father and brother, but I have never said it out loud. If I had a chance, I’d like to thank them for this opportunity,” she said.