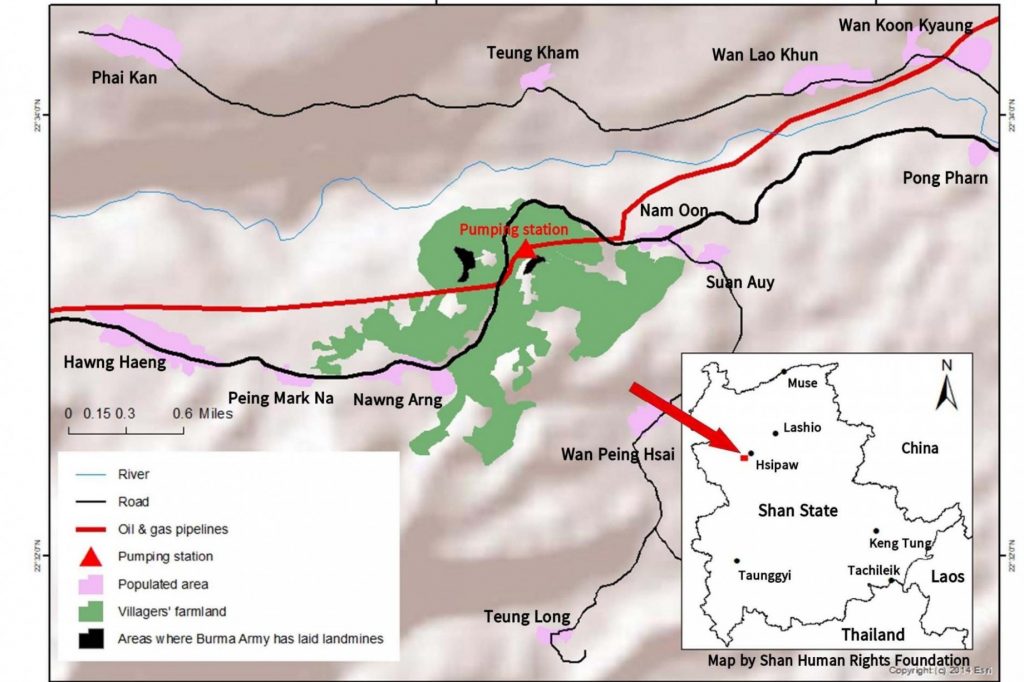 The junta is increasingly relying on troops and mines to secure its infrastructure, including the pipelines sending fossil fuel from the Rakhine coast to China

The junta recently placed landmines around oil and gas pipelines running through Hsipaw Township in northern Shan State to China, according to the Shan Human Rights Foundation (SHRF).

An unconfirmed number of military mines have been set up near a pumping station in forested areas along both sides of the Mandalay-Lashio highway, the rights group said in a Tuesday statement.

The site is just outside Nawng Arng village in Hawng Haeng village tract, some 15km west of Hsipaw town.

SHRF reported that in November, a Myanmar army sergeant informed Hawng Haeng’s headman of their use of the landmines in the area for “security reasons,” despite objections by locals.

The military has reportedly prohibited villagers from entering the mined area, which they have long used to gather edible plants and hunt for wild game.

“The mines are for [the military’s] own security, not for the locals’ security,” SHRF’s Sai Hor Hseng told Myanmar Now.

The pipelines, constructed in 2011 and 2013, carry gas and oil nearly 800km from the Rakhine State coast to China. One-third of the structure is located in northern Shan State, where locals have long opposed the pipelines due to the risks associated with possible leaks or explosions, SHRF’s statement said.

“It’s very dangerous for the people there, and it has become even worse during this crisis,” the group’s spokesperson told Myanmar Now, referring to the nearly one-year period since the February 1 coup.

Following the coup and subsequent attacks on military infrastructure by armed resistance forces, around 20 junta soldiers began guarding the pumping station in Nawng Arng, from Infantry Battalion 23 and Light Infantry Battalions 503 and 504, according to SHRF.

“There is conflict everywhere in the country so the army is afraid for the security of the gas pipeline. They have brought more troops to this area to protect themselves,” Sai Hor Hseng explained, adding, “The military is putting foreign investment ahead of the local people, the civilians.”

The recently mined area along the pipeline is also located in a conflict zone where multiple armed groups are active, Sai Hor Hseng explained.

Among them are forces belonging to the Northern Alliance of ethnic armed organisations—a coalition which includes the Arakan Army, Kachin Independence Army, Myanmar National Democratic Alliance Army and the Ta’ang National Liberation Army—as well as the Restoration Council of Shan State, and the Myanmar army.

During a recent episode of fighting near Nawng Arng, an artillery shell landed some 20m from the pipeline, Sai Hor Hseng said, adding that it is not confirmed which groups had clashed at that time, or who fired the shell in question.

A spokesperson for the International Campaign to Ban Landmines has condemned the ongoing use of landmines in Myanmar, saying there was “no justifiable use of this weapon.”