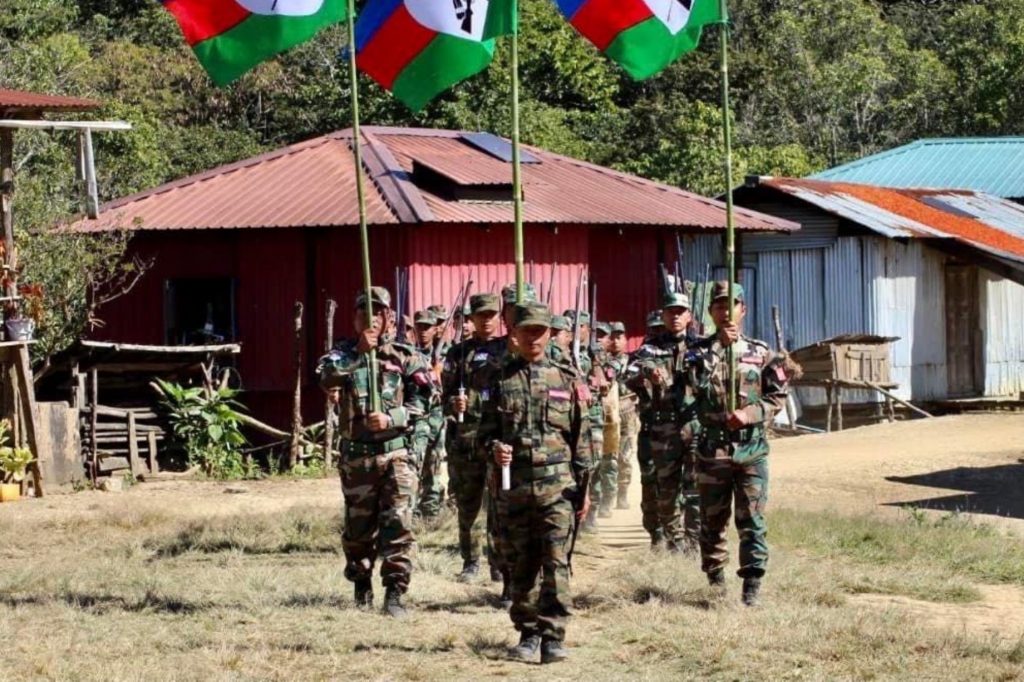 Daily clashes between the Chin resistance and the Myanmar army are breaking out in northern Chin State, with local groups reporting dozens of junta casualties

Daily clashes have been taking place for more than 10 days in northern Chin State along the road connecting Falam Township with Kalay in neighbouring Sagaing Region, according to a resistance force involved in the battles.

A spokesperson for the Chin National Defence Force (CNDF) said that their organisation fought the Myanmar army for two hours on Tuesday near the Falam Township villages of Lati and Kulzam starting at 8am, and killed four junta troops.

“They’re still firing artillery shells indiscriminately,” he said of the military on Wednesday.

A CNDF member was also reportedly injured in the clash.

The recent bout of fighting began on January 8, some 10 days after around 200 junta soldiers from Kalay launched an offensive towards near Webula town in Falam.

The CNDF spokesperson speculated that the move was part of a Myanmar army clearance operation along the road and into the township of Tedim, since the area is a stronghold of the Chin resistance.

At least 50 junta soldiers have been killed during this period of fighting along the Falam-Kalay road, with several more injured, the CNDF estimates, but the military council has not released any statements on the battles in northern Chin State or its own casualties.

Despite being outgunned, Chin forces believe that they have an advantage in the area, due to their geographical expertise, knowledge of explosives, and guerrilla tactics. They are also motivated by the goal of ending military rule in Myanmar, the CNDF spokesperson explained.

“Our comrades on the frontlines firmly believe that the only way to rebuild Chin State is to completely overthrow the dictatorship,” he told Myanmar Now. “They’ve been in this fight for long enough and their skills have inevitably improved.”

On January 15, the CDNF issued a warning to civilians to not travel along the Falam-Kalay road due to the ongoing clashes.

Hundreds of locals from villages along the road including Palte, Kulzam, Lati, Lumbang and Htin Shu Sakhan have been displaced by the fighting.

In October of last year, the military launched a major offensive in Chin State known as “Operation Anawrahta,” in an attempt to crush the resistance in northwestern Myanmar. They reignited the campaign in early January.

The Chin Defence Force-Zotung, another local resistance group, released a statement on Wednesday saying that they had fought a total of 11 battles with the Myanmar army between Hangle and Ramsai villages in southern Chin State’s Matupi Township during the previous 10 days. One of their members and 18 junta troops were killed, they said.

More than 3,000 locals were displaced by the clashes, with some 400 seeking refuge on the Indian border, according to the group.

The United Nations Office for the Coordination of Humanitarian Affairs reported this month that more than 30,000 people across Chin State had been forced to flee their homes by the escalation of fighting between local resistance forces and the junta’s army since the February coup last year.