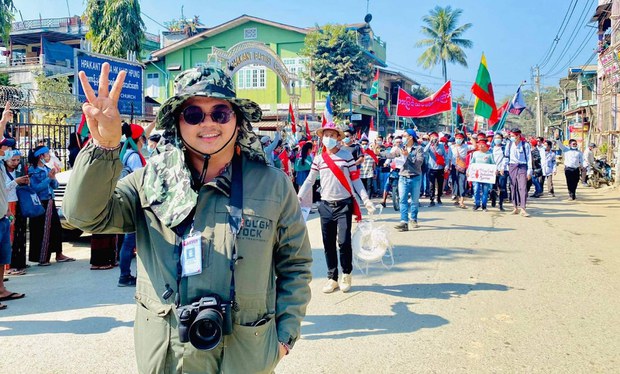 After witnessing a massacre, Sit Ko Naing Htun set his writerly ambitions aside to join a local militia.

Sit Ko Naing Htun was working as a freelance journalist based in Hpakant in Myanmar’s northern Kachin state when the military last February seized control of the country, ousting the democratically elected government.

He dutifully reported on the aftermath for local and international media until one day in he witnessed armed police and soldiers kill unarmed students and other innocent civilians for participating in peaceful protests.

At that point the 27-year-old writer and journalist, who grew up in the nearby Sagaing region’s Yinmabin district, told RFA he decided he couldn’t be impartial in such circumstances, so he traded his pen for a gun and joined the local People’s Defense Force (PDF), a militia made of like-minded people fighting to restore democracy in Myanmar.

“Everyone would be scared to die, right? But I am more afraid of the death of the future of our country, the unity of the ethnic nationalities and the state and the people,” Sit Ko Naing Htun told RFA’s Myanmar Service.

PDF units have sprung up in every part of the country, including areas where armed ethnic militants have been fighting with the military for years. In some cases, the ethnic groups have been working alongside the PDFs as they focus on their common enemy: the military junta trying desperately to retain its power.

The PDF Sit Ko Naing Htun joined operates in an area controlled by an armed ethnic group. There, he said, he is struggling to overcome the hardships of life with his fellow revolutionaries.

“It’d make a difference for the country if you could be a grain of sand or a piece of brick in the armed struggle. We have prepared ourselves to fight to the end so that the state and the people do not die. Because it’s going to be the last battle to root out the evil army that should no longer exist,” Sit Ko Naing Htun said.

Before he became a journalist, Sit Ko Naing Htun wrote short stories and poems. He organized community library associations to provide books to towns and villages in Kani township, part of his home district. He also organized seminars to educate young people on literature and served as the chairman of the Yinmabin township Writers’ Association.

In 2017, under the pen name of Ketharaza, he wrote a collection of short

He had planned to publish a collection of poems and a book about archeology, but the coup put those plans on hold. He hopes to revisit these after the fighting ends.

Sit Ko Naing Htun said he has had no contact with his family who are now refugees in Yinmabin.

“The military has blocked telephone lines and shut down the internet in our townships. Sometimes we can listen to news on the radio,” he said.

“I worry about my family when I hear sad news about our townships. But in our situation, we can just worry. There is nothing you can do about it except worry. We cannot even have any contact with them to ask how they are doing,” said Sit Ko Naing Htun.

But the writer-turned-soldier believes that a united people can overcome the well-trained military and regain control of Myanmar.