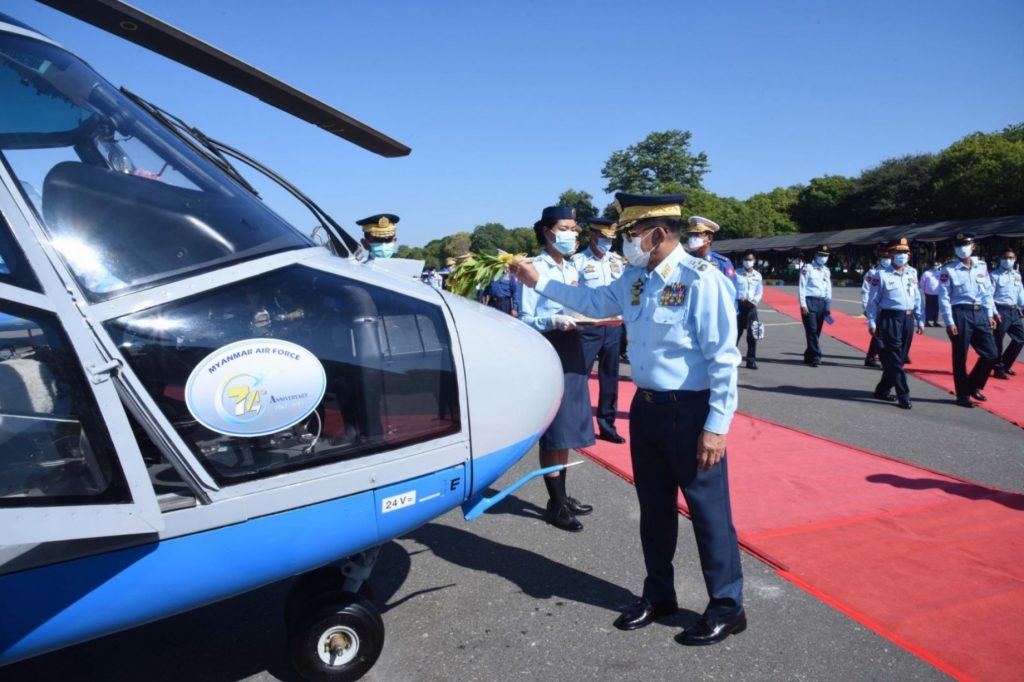 Nearly a year after seizing power, Myanmar’s coup regime continues to struggle to bring the country under its control. Savage crackdowns on peaceful protests spawned an armed resistance movement that has not only grown in size, but also merged to some extent with longstanding ethnic conflicts to create an increasingly unmanageable situation on the ground.

In response, the junta has stepped up its efforts to assert itself in the one area where it reigns supreme—in Myanmar’s airspace.

While the military has long used an array of aircraft against the country’s ethnic armies, its deployment of combat helicopters, fighter jets and surveillance drones against civilian defence forces formed since the coup attests to the growing effectiveness of these groups’ efforts to thwart the junta’s bid to cement its hold on power.

Initially armed with little more than handmade muskets, many anti-regime resistance forces have since expanded their arsenals and proven to be formidable foes. Relying mostly on guerrilla tactics, including the use of improvised explosive devices (IEDs) in ambushes on military convoys and columns of soldiers sent to “pacify” regions that had been largely free of conflict before the coup, they have inflicted heavy losses on far better-armed and better-trained regime troops.

The regime’s launch of a major offensive dubbed Operation Anawrahta in late October was meant to bring the armed resistance to heel, but instead resulted in an even higher number of military casualties—1,300 in one month alone, according to figures released by the shadow National Unity Government (NUG) in November.

This has undoubtedly taken a significant toll on troop morale. And this, according to Padoh Saw Taw Nee, a spokesperson for the Karen National Union (KNU)—which claims that it killed 267 junta soldiers in more than 300 clashes last month—is reason enough for the regime to make airstrikes its tactic of choice.

“Their ground troops have been facing major casualties, so they are now dropping bombs all over the place from the air, hoping to raise their soldiers’ spirits,” he said in response to the military’s latest air campaign in Kayin (Karen) State.

The KNU was the first group to come under an aerial assault after the coup. In late March, as the military was unleashing hell on protesters in towns and cities around the country, the KNU’s armed wing, the Karen National Liberation Army (KNLA), overran a military outpost in Kayin State’s Hpapun (Mutraw) Township. This triggered a series of airstrikes that killed dozens of civilians and forced 70,000 people in Hpapun alone to flee their homes. Other areas under KNU control, including parts of Bago Region, were also targeted.

A month later, another ethnic armed organisation (EAO), the Kachin Independence Army (KIA), faced a similar onslaught after a battle that left 20 members of the military’s Light Infantry Division 77 dead. Days later, on May 3, the KIA managed to shoot down one of the helicopters used, along with fighter jets, as part of the regime’s retaliatory response.

By the middle of May, the southern Chin State town of Mindat was also coming under intense pressure from a land and air assault. And before the month was over, the junta was also carrying out airstrikes in Kayah (Karenni) State’s Demoso Township after resistance forces there reportedly killed more than 100 regime soldiers.

Meanwhile, as all of this was happening, the junta’s air force chief, General Maung Maung Kyaw, was in Moscow shopping for more helicopters. His attendance at the HeliRussia expo on May 20 highlighted the regime’s growing reliance on both Russia and aerial warfare to maintain its hold on power.

According to Siemon Wezeman, a researcher at the Stockholm International Peace Research Institute, Russia supplies 17% of Myanmar’s military hardware—“mainly in the form of combat aircraft and combat helicopters”—putting it behind only China, the source of 50% of all weapons imported by the regime.

The visit by Maung Maung Kyaw (who has since been replaced as commander of Myanmar’s air force) was followed a month later by another to Moscow by junta leader Senior General Min Aung Hlaing. While no new weapons purchases were announced during this visit, it signalled the strength of the junta’s ties with its chief supplier of the sort of armaments that it will need to contain resistance to its rule.

Former air force chief General Maung Maung Kyaw (C), stands at ease among other high ranking military officers as they listen the speech of Min Aung Hlaing (not in picture) in this photo from February 2018 (EPA)

Before the coup, Sagaing and Magway regions had no active insurgencies. Since then, however, they have become key battlegrounds in the civil war that has engulfed much of Myanmar.

In the final few months of the year, the junta started using fighter jets and helicopters to hit back at guerrilla groups in these regions for their attacks on police stations, military outposts, and reinforcements pouring into this increasingly restive corner of the country. This began as early as September, but was scaled up after the launch of Operation Anawrahta.

In a pattern repeated again and again in recent months, the military used helicopters to airlift soldiers into villages suspected of harbouring resistance fighters, forcing residents to flee as their homes are torched by occupying troops. Those who fail to escape are often found dead by villagers who return to survey the damage after the soldiers leave.

Residents of Hnankhar, a village in Magway Region’s Gangaw Township, discovered the bodies of a number of villagers killed by regime forces following an air raid in December (Supplied)

Meanwhile, on the other side of the country, in eastern Myanmar’s Kayin (Karen) and Kayah (Karenni) states, a similar campaign of terror has played out since late last year. In mid-December, renewed clashes between the KNLA and regime forces in the KNU-controlled town of Lay Kay Kaw set off more airstrikes, triggering yet another mass exodus of civilians amid calls from the KNU for the United Nations to establish a no-fly zone over the Thai-Myanmar border.

While raining bombs and bullets down on villages has been an effective way of terrifying local populations, it hasn’t been the only means of doing so at the regime’s disposal. In addition to deploying airstrikes and heavy artillery, the junta’s forces have also committed even more heinous attacks to send the message that resistance comes at a cost.

The massacre of dozens of civilians near Moso, a village in Kayah State’s Hpruso Township, on Christmas Eve ended the year on an especially grim note, showing how far the regime was willing to go to force Myanmar’s people into submission.

“They commit all these atrocities to demonstrate that they have everyone’s lives in their hands,” said Aung San Myint, the deputy secretary of the Karenni National Progressive Party (KNPP), an EAO that has joined forces with post-coup resistance groups active in Kayah State.

(The junta has blamed the KNPP and other anti-regime “terrorists” for the deaths in Moso, despite abundant evidence suggesting that soldiers stationed in the area were responsible for the mass killing of at least 31 civilians whose charred remains were discovered on Christmas morning.)

While no aircraft were used in that incident, the regime has carried out at least a dozen airstrikes in the area, according to Aung San Myint.

“It’s so bad that if it continues, there will be nothing left of our state but ashes. It will be like Syria. We are very worried,” he said.

Despite these fears, resistance forces remain confident that they will ultimately prevail in the struggle against Myanmar’s military dictatorship.

“We are expecting that our revolution will be successful by the end of this year,” NUG Prime Minister Mahn Win Khaing Than told Myanmar Now in a recent interview.

“I know that the people are very exhausted and I promise that it will be done by the end of this year. We are trying our best to stand victorious in the shortest amount of time,” he said, adding that the only reason the regime has managed to cling to power this long is that it has one major advantage.

“We have the upper hand on the ground. We just need to worry about their air force. These are the things we need to discuss with the EAOs. We would have won a long time ago if they didn’t have an air force,” he said.

This view was echoed by the leader of a resistance group based in Sagaing’s Pale Township in another recent interview.

“To be honest, we are not afraid of the junta’s troops on the ground anymore. We aren’t even scared when they use tanks. However, when they use airstrikes, it is quite difficult for revolutionaries,” said Naga, the leader of the Pale People’s Defence Force, who was the target of an air assault earlier this month.

While the resistance forces continue to face challenges, they also have advantages of their own—the support of ordinary citizens being foremost among them. Importantly, this is something that those fighting on the political front appear to recognise should not be taken for granted.

“As the current chairperson of the Monywa Strike Committee, I deal with the on-the-ground matters. In every rally, I try to emphasise the fact that no organisation can exist for very long without the support and trust of the people,” he said, adding that this includes the armed resistance.

For its part, the regime appears to be counting more on Russian backing to maintain its tactical edge. But whether its air superiority will be enough to fend off the many forces arrayed against it remains to be seen.

“One of the lessons of the last century of airpower has been that airpower cannot effectively, in almost any circumstance, function effectively alone. It requires many elements to make it effective,” according to Frank Ledwidge, an authority on aerial warfare.