Myanmar’s PDFs in ‘phase one’ of revolutionary war 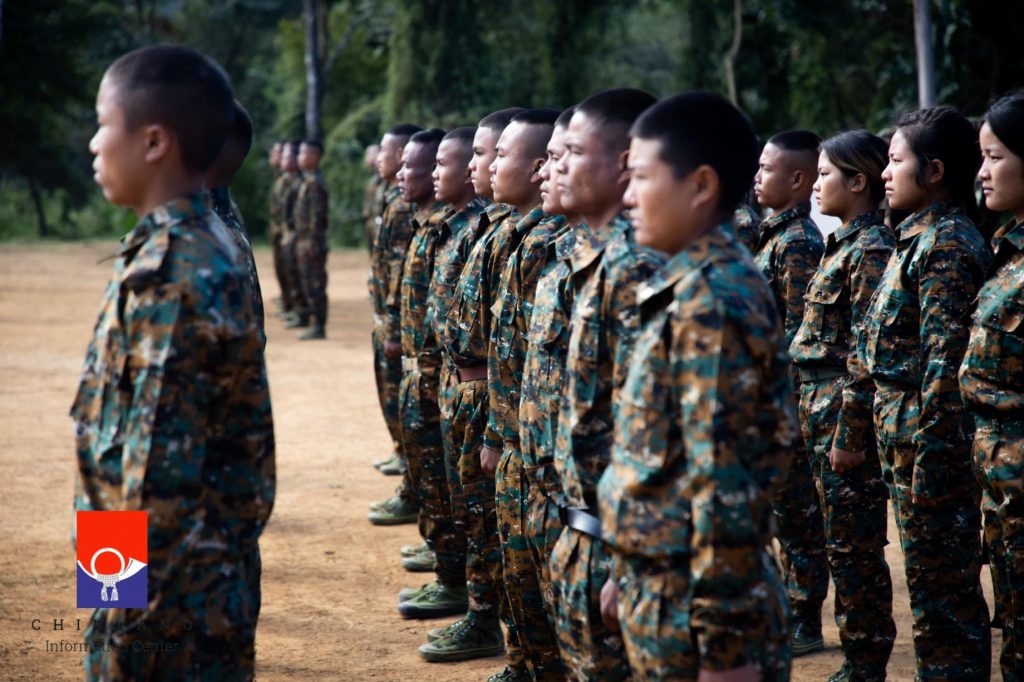 Guerrilla forces’ tactical achievements in the war on the junta must be followed by the development of a long-term national strategy, analyst Anthony Davis says

Decades of armed resistance to the Myanmar military entered a new phase in April of last year, when civilians formed local defence forces to attack the troops and infrastructure of the junta that seized power in the country’s February coup. Guerrilla groups have since been created nationwide, carrying out ambushes on military positions in coordination with and in addition to attacks launched by ethnic armed organisations.

The Myanmar army has responded with airstrikes and ground offensives involving massacres, the torching of villages, and the displacement of hundreds of thousands of people.

Myanmar Now spoke with Anthony Davis—a Bangkok-based security consultant and analyst with extensive field experience on a range of armed conflicts across Asia—on the current and evolving armed struggle between resistance forces and the Myanmar military. He writes primarily for IHS-Janes, a security and defence publication.

Myanmar Now: In a matter of months, the resistance forces, armed mostly with improvised weapons, have been able to significantly challenge an army that is said to be ranked 39th in the world and one of the most powerful military institutions in the region. What do you think made this possible?

Anthony Davis: At root, the emergence and survival of resistance forces against often severe odds has stemmed from popular support which is the foundation of any sustainable guerrilla campaign. And in the case of Myanmar that support has been overwhelming from the outset. But it should also be remembered that the capabilities of the Tatmadaw are routinely exaggerated by outside observers.

The military has discipline, cohesion, organisation and resources but it has also been critically undermanned and operationally overstretched for at least two decades. With the spread of armed resistance across central Myanmar since April last year, these vulnerabilities are now looming larger than ever before.

What can we conclude militarily from the junta’s reliance on airstrikes against local defence force strongholds and remote villages?

It is a dangerous illusion to imagine that the Tatmadaw’s growing use of air power somehow reflects military weakness, or even desperation. There has recently been a good deal of media commentary suggesting this, and I believe it is badly misplaced. As illustrated in Vietnam, Afghanistan and the Middle East, since the 1960s, modern counterinsurgency campaigns have tended to rely heavily on air power for a range of functions: resupply, casualty evacuation, reconnaissance & surveillance and, of course, close air support, and air-mobile operations. The Tatmadaw campaign in Myanmar is no different.

Members of the Loikaw PDF are seen in a photo released by the group on September 30, 2021 (PDF Loikaw/Facebook)

At the same time, air-mobile operations—moving heliborne infantry directly into combat zones—offer speed and the advantage of surprise that troops moving by land cannot achieve. If based on good intelligence, air-mobile assaults can be extremely effective when targeted against insurgent command posts and logistical centres that the resistance might have assumed were relatively safe.

It is, though, worth noting that although the Tatmadaw’s growing resort to air power has been predictable, it will be limited by a shortage of both attack and transport helicopters to respond to an insurgency that is already spread across a huge battle space. It remains to be seen whether the Myanmar Air Force (MAF) will look to additional purchases of Russian Mi-17 transport helicopters and Mi-35 gunships—both already in action daily—to mitigate the problem.

The Tatmadaw will almost certainly also try and offset shortages of manned aircraft by increasing deployment of UAVs (unmanned aerial vehicles) or drones. In the coming months, we can expect to see Chinese drones already in the MAF’s inventory, and perhaps newer platforms from other vendors deployed both in reconnaissance and surveillance roles to gather battlefield intelligence, and in combat roles for direct strikes on resistance targets.

Local defence forces, including the People’s Defence Forces (PDFs) of the underground National Unity Government, are not equipped to counter the junta’s air power. How can they resist the airstrikes, in your opinion?

Over the coming months Myanmar’s PDFs will learn to deal with Tatmadaw air power through experience—often painful. In the absence of anti-aircraft weapons such as heavy machine-guns and surface-to-air missiles which PDFs do not yet have, the best defences against air power are always speed, dispersal, camouflage, and darkness. This means basically concentrating forces—ideally in overwhelming strength—for sudden, hard-hitting attacks at night or before dawn, aimed at overrunning weak enemy positions and seizing weapons, and then dispersing rapidly before support or retaliation from the air can arrive. The same principles should apply to road ambushes which are more likely to be daytime operations.

Assuming air support is available at all it will normally take at least one and more likely two hours to arrive over the battlefield. By that time resistance forces should have dispersed.

With disproportionate firepower, it will be difficult for the current armed resistance to engage in a conventional war against junta troops. How might these forces prepare and what obstacles do you expect they will face in the long run?

Myanmar’s PDFs are a very long way from achieving any conventional capability. They are still in Phase One of what Mao Zedong famously defined as a three-phase revolutionary war. That means first a phase of “strategic defence” fought by poorly armed guerrilla bands; then a phase of “strategic balance” when resistance forces have developed larger, better equipped and more mobile units; and only finally an offensive phase in which revolutionary forces have achieved a conventional capability involving regular or semi-regular forces, and regime forces are increasingly confined to urban centres. Typically, these three phases might take several years.

What is critical at this early stage is building on the tactical achievements of local guerrilla forces in the framework of a long-term national strategy. The NUG’s defence ministry has a critical role to play in developing this strategic framework and fostering cooperation and coordination between PDF alliances in different regions.  Without strategic planning at least across the ethnic Bamar heartland of the country, the conflict will lack direction, and in a worst-case scenario, local resistance forces may never come together. Whether the defence ministry is already working in this direction and how much they have achieved to date is difficult to assess.

What impact does the current popular armed uprising in Myanmar have on regional security? What do you feel may be the concerns of regional governments, particularly China, India, and Thailand, and what action can we anticipate?

To date, the Myanmar crisis has had little immediate impact on regional security. Despite the heavy fighting in many parts of the country there has been relatively little spill-over into neighbouring states. The number of refugees moving into either Thailand or India has been small when set against the population displaced inside the country since the coup—somewhere between 300,000 and 500,000 people. And clashes close to the border have only once or twice impacted Chinese or Thai territory in the form of a few stray rounds of mortar or small-arms fire.

But as the fighting escalates, the signs are all bad and governments in Bangkok, Beijing and New Delhi are clearly concerned and monitoring events closely. Their concerns relate to influxes of refugees, the spread of COVID-19, and cross-border organised crime and increased traffic in drugs, guns and people. China has been notably proactive in establishing a “cordon sanitaire” along its border in the physical form of fencing and in the political shape of good relations with ethnic armed factions in Kachin and Shan states that are responsive to Chinese concerns. Thailand and India, both at pains not to antagonise the Tatmadaw, are less willing to pre-emptively support ethnic forces to build up solid border buffers and appear basically to be hoping for the best—that the Tatmadaw can somehow prevail or that diplomacy can stave off an implosion of the Myanmar state.

It is also worth adding that regional security has not been enhanced by the widening rifts within the ASEAN community that the Myanmar crisis has provoked. And divisions within ASEAN that undermine the bloc’s aspirations towards “centrality” in the Indo-Pacific are only likely to encourage external powers to play more assertive roles in Southeast Asia.

A member of the Loikaw PDF is seen in a photo released by the group on November 4, 2021 (PDF Loikaw/Facebook)

Do you think China, India or Thailand would play a role militarily in the current crisis in Myanmar?

None of Myanmar’s neighbours is foolish enough to want to play any direct military role in Myanmar’s internal conflict. However, all three states necessarily have relations with longstanding ethnic armed organisations camped on their borders. Were the situation inside Myanmar to deteriorate dramatically and central administration from Naypyitaw begin to fragment, these ethnic forces could well serve both as border buffer forces and, in a more proactive sense, as military proxies.

In the case of China, this dynamic is already well advanced: the United Wa State Army and its allies have long served as powerful buffer forces, armed with modern Chinese hardware, along China’s border with Shan State. Should Beijing feel impelled by Tatmadaw weakness or collapse to move to protect its commercial and infrastructure interests beyond the border zone, those buffers could very rapidly become proxies.